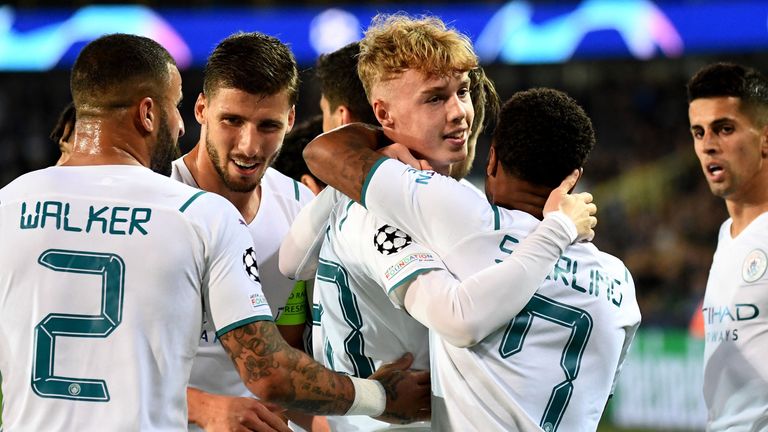 Heading into the game, there was an element of pressure hanging over Pep Guardiola's side following their 2-0 defeat at PSG last month. Club Brugge started the game one point ahead of the Premier League champions, but any pressure was quickly relieved as the visitors secured a 2-0 advantage going into the break thanks to Joao Cancelo's strike (30) and Riyad Mahrez's penalty (43).

Their dominance continued after the break as Kyle Walker finished another fine City move in the 53rd minute before Palmer made an instant impact from the substitutes' bench.

The 19-year-old was only on the pitch for two minutes before scoring his first Champions League goal with a fine left-footed finish into the bottom corner (67).

Club Brugge finally had something to cheer late on when Hans Vanaken grabbed a late consolation (81) but it was the only blemish for City, who added a late fifth as Mahrez grabbed his second of the game (84) to put the finishing touch on a near-perfect night for Guardiola and his side as they look to secure top spot in Group A.

"What a performance from Man City that was. Club Brugge have shown already in the Champions League this season that they have quality - but City thrashed them.

"Phil Foden was once again the standout performer for Pep Guardiola's side but what a moment for Cole Palmer to bend in his first Champions League goal. The first of many, I'm sure.

"City could even have scored more in the final minutes but that win is just what they needed after losing at PSG last time out."

Manchester City have won 35 of their 53 matches in the UEFA Champions League under Pep Guardiola (D7 L11), with only Bayern Munich (39) winning more games in the competition since the Spaniard took over in 2016-17.

This was the 19th time a Pep Guardiola side has scored 5+ goals in a UEFA Champions League match, more than twice as many times as any other manager's sides have done so (Arsène Wenger and Sir Alex Ferguson, 8).

Club Brugge have failed to win any of their last 13 matches against English sides in Europe (D3 L10) since beating Chelsea at home in the Cup Winners' Cup in 1995 - they have conceded 35 goals across those 13 games.

Phil Foden has six goals and six assists in the UEFA Champions League for Manchester City. The only player to provide more goals and assists under Pep Guardiola in the competition before turning 22 is Lionel Messi (14 - 9 goals and 5 assists).

What's next for Man City?

Manchester City face a trip to Brighton in the Premier League on Saturday; kick-off 5.30pm, live on Sky Sports.

Their next Champions League assignment is against Club Brugge on November 3 at the Etihad Stadium; kick-off 8pm.