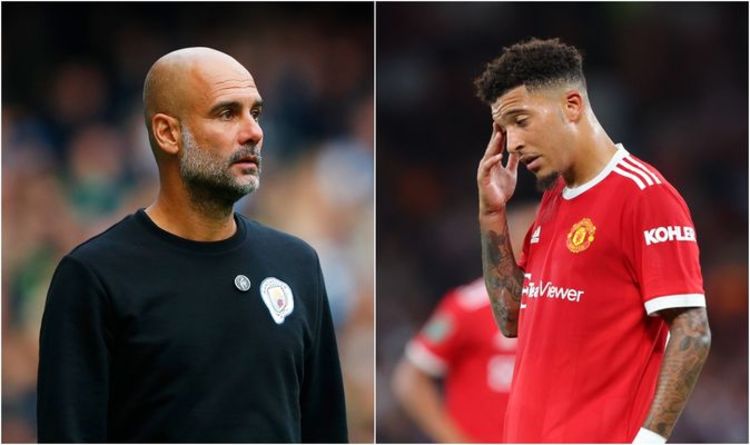 Manchester United winger Jadon Sancho was hauled off during yet another tough afternoon in United red as his side crumbled to a 4-2 defeat at the hands of Leicester City. His poor start to life at Old Trafford has come as a surprise to many, but perhaps not to Manchester City boss Pep Guardiola who may have seen his struggles coming.

Before their second-half capitulation, there were a few positives for boss Ole Gunnar Solskjaer to take, namely Mason Greenwood’s early screamer.

Marcus Rashford also got on the scoresheet after making his return from injury, although the positives pretty much end there.

In what has become something of a theme, Sancho was substituted without notching a goal or assist, taken his barren run to 10 games since making the switch from Borussia Dortmund.

What made it worse for the 21-year-old was Rashford’s goal-scoring cameo after coming on to replace him.

Sancho looked like a sure thing when United finally pulled off a transfer which took them two summers to complete, although Guardiola may have known something everyone else didn’t.

Earlier this year, the Spaniard confirmed that he had ‘no regrets at all’ about letting the winger leave City back in 2017.

"I've said many times, it is not a regret. He decides. He's doing really well,” he added.

At such a young age, he will have plenty of time to turn it around, but prospects of doing so in the near future do not look so good given United’s daunting run of fixtures.

Tough outings against Liverpool and City themselves lie on the horizon, where Sancho will undoubtedly attempt to make Guardiola eat his words.

He will not be the only one under pressure, however, as questions will now be asked of Solskjaer’s credentials to lead the team.

Results have been poor in recent weeks, and even when they have managed to grab the three points, it has rarely been in convincing fashion.

After a tough afternoon in the Midlands, there is lots to take in for everyone at United.