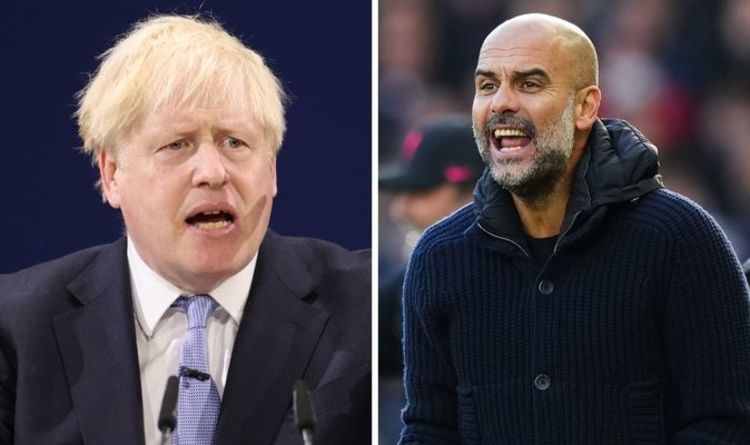 The Premier League is back and the international break is over, at least for a month, anyway.  In a bumper weekend of fixtures Leicester host Manchester United, Chelsea travel to Brentford and Aston Villa face Wolves in what is bound to be a feisty encounter. Champions Manchester City, meanwhile, take on Burnley at the Etihad.

City boss Pep Guardiola, born and bred in Barcelona, has been a long-term supporter of Catalonian independence.

In October 2017, the region’s government held an independence referendum without permission from Madrid. It was declared unconstitutional.

Organisers at the time said 92 per cent of voters were in favour of independence, although turn out was just 43 per cent owing to a unionist boycott.

Catalonia declared independence, but no state recognised the move as legitimate.

READ MORE: Chelsea could be without six stars for Brentford trip as Blues sweat

Guardiola was fined by the FA in 2018 for wearing a yellow ribbon to show his support for those imprisoned during the independence push.

He offered an insight into his views on Brexit while defending his move: “Before a manager, I am a human being.

“You did the Brexit, you let people have their opinion.

“You allowed Scotland to make a referendum about if you want to stay or not. And, after, the people vote.

“That is what they ask [in Catalonia] and they are in jail right now.

Guardiola, who played 263 times for Barcelona and later enjoyed a successful spell as the club’s manager, added: “There are four guys in prison. There are other guys, who are outside from Catalonia.

“When they come back, they are going to be jailed, imprisoned for rebellion and sedition.

“They don't have weapons. The weapons that we have is just the vote, the ballot.

“It’s not about politicians, it’s about democracy. It’s about helping the people who didn’t do absolutely anything.”

Guardiola had previously said, in March 2017, that he “admires” England for voting.

He congratulated the British decision to leave the European Union.

“Congratulations, you have voted,” he said. “You have been allowed to decide and that is what democracy is about.”

Guardiola is expected to leave City next year. (Image: GETTY)

Guardiola released a statement at the time condemning their imprisonment, and asking for peaceful discussions.

He admitted personal friends of his would face “nine years in a jail for voting”.

The Spanish government pardoned the leaders in June, a move which Spanish Prime Minister Pedro Sanchez said aimed to aid reconciliation between Catalonia and the rest of Spain.

Mr Sanchez, prior to the coronavirus pandemic, had met with pro-independence leader Quin Torra to begin negotiations with Catalonia.

Guardiola, meanwhile, faced criticism from his own supporters last month after calling for “more people to come” after just over 38,000 fans attended his side’s clash with Southampton, 17,000 short of the Etihad’s full capacity.

He has been in the Etihad hotseat since the start of the 2016/17 season, and admitted in August that he will likely leave the reigning champions in 2023 when his current deal expires.

At 50, he expressed a desire to “have a break” and “rest” before possibly venturing into international football.