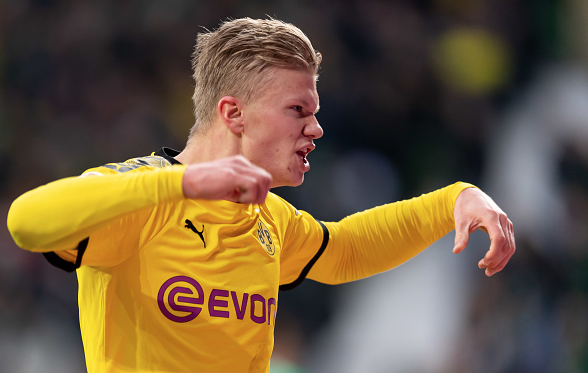 Erling Haaland ‘begins to escape’ from Real Madrid, following Manchester City and Paris Saint-Germain’s ‘entry into the scene’, according to AS.

Reports from the British press stated the Citizens plan to meet the Borussia Dortmund star’s advisor, Mino Raiola, in January.

AS have relayed it and then state it’s ‘logical’ for the Premier League winners to bet on the striker, having missed out on Tottenham Hotspur’s Harry Kane in the summer.

Pep Guardiola still maintains an interest in signing a centre forward since his side failed to bring in a replacement for Sergio Agüero.

He is not completely convinced with Gabriel Jesus, despite his scoring record. Added to this, there’s Raheem Sterling’s desire to look for a move away from the Etihad. AS are of the belief all these factors make it ‘logical’ for the English champions to bet on the Norwegian.

Erling’s father, Alf-Inge Håland, played for City between 2000 and 2003, and his past ties with the club ‘would be of great help’ for the Manchester side in any potential deal next summer.

PSG have also appeared lately in the chase for the BVB frontman and their good ties with Raiola could favour them in any operation at the end of this season.

Real Madrid’s great desire is to sign Kylian Mbappé on a free transfer next summer. They plan to use the Frenchman’s transfer to convince Haaland to accept their superior sporting project over better financial aspects from elsewhere.

AS state: ‘Be that as it may, the operation to sign Haaland is complicated, but Madrid’s history is full of great feats, also in the market.’