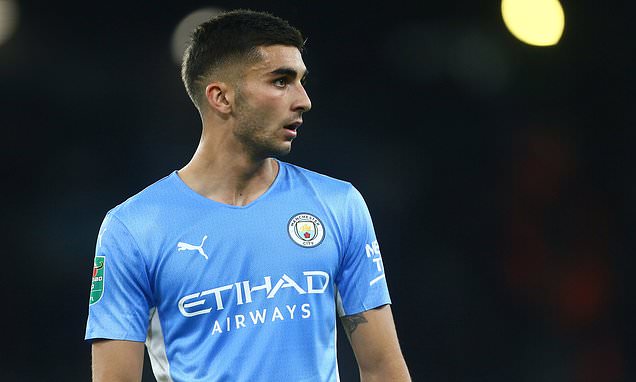 Ferran Torres is set to be out for up to three months for Manchester City after fracturing his foot while on duty with Spain.

Torres is understood to have picked up the injury during the international break in the Nations League semi-final victory over Italy where, having scored twice, he limped off four minutes after half-time.

The forward was then passed fit to feature against France in the final before he was again replaced in the 84th minute.

But having undergone tests on his return from the international break, the club have confirmed that they don't expect the 21-year-old to return until the new year.


Pep Guardiola confirmed on Friday that despite likely playing against France with a broken foot, he had no qualms about how Torres's injury was dealt with by the Spanish national team led by his former Barcelona team-mate Luis Enrique.

'Torres is out for two and a half to three months,' Guardiola said. 'It's a bone in his foot, metatarsal.

After scoring twice against Italy, he limped off shortly after the start of the second half

'The injury can happen here in the national team, I know perfectly the manager for Spain, he treated Ferran as well as possible. If he gets injured, they tried to take care, sometimes it happens. It happened with Phil [Foden] and Kevin [De Bruyne].

'It happens, there are lots of games, he'll go to Spain for a few weeks. He'll be ready in three months.'

Torres started Manchester City's first four matches of the season in the Premier League, netting a brace and grabbing an assist in the 5-0 home win over Arsenal before the September international break.

But he has since dropped out of the starting XI after being left on the bench for the subsequent three encounters in the top flight.

However, he was then passed fit to start the final against France where he played 84 minutes during his country's defeat at the San Siro

In better news for Guardiola, he has confirmed the rest of his squad are match fit to face Burnley at the Etihad Stadium on Saturday.

The City boss confirmed the returns of Oleksandar Zinchenko and Ilkay Gundogan back from injury and that they have been training with the first-team again ahead of the return of the Premier League this weekend where they sit two points off the summit in third behind leaders Chelsea as well as Liverpool.

'Zinch and Gundo are back. They trained this week and we are happy and delighted they are back', Guardiola added.