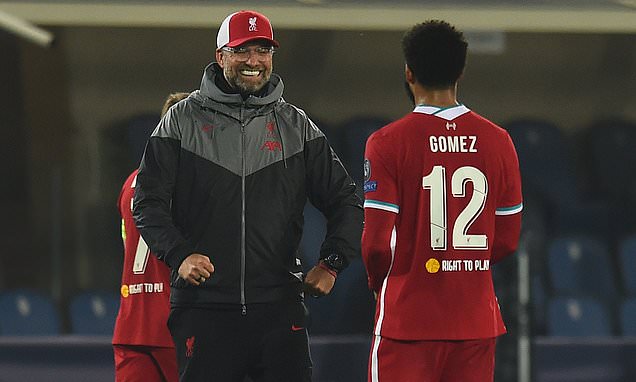 By Richard Martin For Mailonline

Liverpool manager Jurgen Klopp has hit out at Gareth Southgate for not picking Joe Gomez for England's recent World Cup qualifiers - especially after including John Stones, who has played no club football at all this season for Manchester City.

Klopp has been easing Gomez back into action after he missed the majority of last season with a serious knee injury sustained while in England training.

Gomez has only played 12 minutes of Premier League football this season, with Virgil van Dijk and Joel Matip proving unmoveable at the heart of the Reds' defence.

But he has been given valuable game time in the Champions League and Carabao Cup and Klopp would have liked for him to have got more minutes under his belt for England this month.


However, Gomez was left out by Southgate for the World Cup qualifiers against Andorra and Hungary while Stones started both games, scoring in the 1-1 draw with Hungary.

'Sometimes Gareth reacts if you are not playing for your club you can't play for the national team,' Klopp told his Friday press conference ahead of the trip to Watford.

'Obviously there is a special thing for Mr Stones.'

'He's in top shape. Joe hasn't been called up, it would have helped him. He's an exceptional centre-half.

'We have five exceptional centre-backs. Nat Phillips is not in the squad but [neither is Ibrahima] Konate and Joe as well.

'Last year taught us we need at least four centre-backs but when they are all healthy, we get these questions.

'It's not perfect every week for them but it's the situation and they deal really well with it because of their quality.'