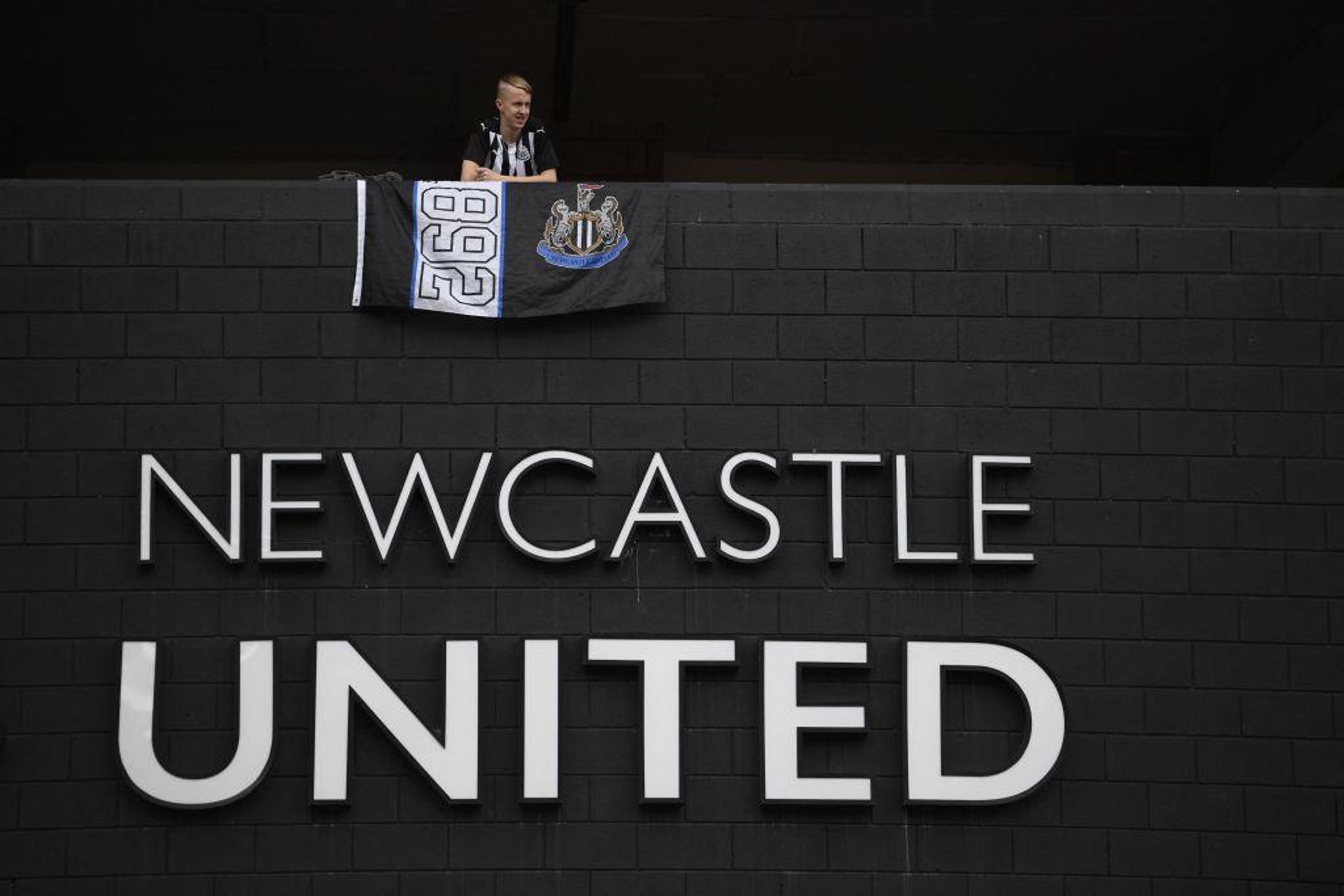 While other Premier League teams spent, the club, under Mike Ashley, more often than not made a profit.

Top-flight survival is no longer the overriding goal of a club which hasn’t won a major trophy since 1969.

Speaking a week ago today, Staveley said: “We have the same ambitions as Manchester City and PSG in terms of trophies, absolutely, but that will take time. Do we want to win the Premier League within five to 10 years? Yes. This takeover is hugely transformative.”

That will take time – and, just as importantly, money.

So what do the rules around spending in football mean for the club and it’s new owners?

A Newcastle United supporter stands with a flag above the club logo at St James's Park following the takeover.

“Obviously, given that Newcastle aren’t in European competition at the minute, they’re not going to be hit by UEFA’s Financial Fair Play.

“The Premier League’s rules are probably more important. Basically, if a club makes more than a £15million loss a season, they have to demonstrate to the Premier League that they can afford to pay those debts, which for the vast majority of club’s isn’t an issue.

Importantly, the PSR rules do not cover spending on infrastructure. Spend on women’s football and community work is also not included.

Bason said: “Those losses don’t investment in infrastructure, stadiums or training grounds. They want to encourage clubs to invest in that.

Bason added: “You’ve seen this with Manchester City and what they’ve done in the east end of Manchester. That’s not part of Financial Fair Play, and they’ve been able to invest huge amounts in that region.

“They can develop the stadium, anything that’s a ‘tangible, fixed asset’. So training ground, stadium, community development, youth development – none of that is part of Financial Fair Play spend.”

Certainly, Ashley’s parsimony at United has strengthened the hand of the club’s new owners.

“Basically, £105million is the amount clubs are allowed to lose over any three-year rolling period,” said Bason.

“Newcastle haven’t had to worry about this, as Mike Ashley hasn’t spent a huge amount of money. That actually now puts them in a really good position, as they’ve basically got about £90million to play with on top of the £105million allowed because they’ve spent so little. That basically means over the next 12 months or so they’ve got an additional £200million or so to spent before they start getting into hot water with the Premier League.

“You’d have thought that gives them money to spend in January if they want. You’d have thought given their position they’d be investing in players to ensure they don’t go down, because if they do go down, that’s going to cause them issues in the future.”

The investment group has studied previous takeovers, and there are lessons to be learnt, most recently from Everton, which was taken over by Farhad Moshiri in 2015 and is now managed by former Newcastle manager Rafa Benitez.

“We don’t really know what happens if a club reaches the £105million,” said Bason. “It hasn’t really happened yet.

“You can compare them to Everton. When Moshiri took over, they invested an awful lot of money. They bought £20million, £30million and £40million players, the likes of (Alex) Iwobi and Richarlison, players like that, and wages in the likes of Fabian Delph and James Rodriguez.

“That’s hit them this season. They spent £2million or so on Andros Townsend and Demarai Gray, and very little else, because, effectively, they’re at the absolute upper limit of a £105million loss.

“The punishment the Premier League suggests happens if you breach the £105million is that you’re stopped from registering your players. You’re stopping from signing your players, kind of like what we’ve seen with Barcelona.”

United have room for manoeuvre in terms of immediate investment in a squad which looks short in several areas, but, going forward, the club must increase commercial revenues which stagnated under Ashley.

“Newcastle have got an immediate £200million or so before they start to breach those regulations,” said Bason.

“But, because it’s on a three-year rolling basis, over the next couple of years they’ll start to lose those profitable years, and they’ll end up with more years of over-spend, and what that basically means is that they’re going to need to increase their revenues.

"If you don’t want to make a loss, you either cut your costs, which they’re unlikely to do, or you increase your revenues.

“The ways that clubs get money are selling players, increase matchday revenues, increase the stadium (capacity) and hospitality.

“It’ll be interesting to see if they lose any domestic sponsors, who perhaps don’t want to be associated with the Saudi regime, but you’d have thought that Newcastle would be able to get quite a few new commercial deals to boost that revenue.

“The profit and sustainability rules don’t allow clubs to make up a deal, so they couldn’t have PIF sponsoring St James’s Park for £200million a season. They’re not allowed to do that. They can increase their revenue in terms of commercialisation, but there will be some restrictions on that.”

“They can also increase their revenues through broadcasting, and I’d assume between now and the end of the season they’ll have more games on Sky and BT, which would get them a couple of extra million per game.

“The best way is through qualification for Europe, but that brings them into UEFA’s Financial Fair Play rules, which were previously a lot more stringent."

The financial power of PIF is unrivalled in football.

Asked if any ownership group in the world compares to United’s new owners, Bason said: “In terms of pure money, no.

"They’re much richer than the UAE takeover at City. I don’t think there’s anything that’s really compared with it before. But when UAE took over at Man City, they didn’t have the same restrictions PIF do. They could go out and spend as much as they wanted.

“What we don’t know is to what extent they want to go out and spend money. We’re kind of assuming they do, but we don’t really know the objective of taking over. I’m assuming the idea is to bring benefits to Saudi Arabia through sportswashing or soft power generation, in which case, in terms of cash they can spend, we haven’t really seen anything like this before.”