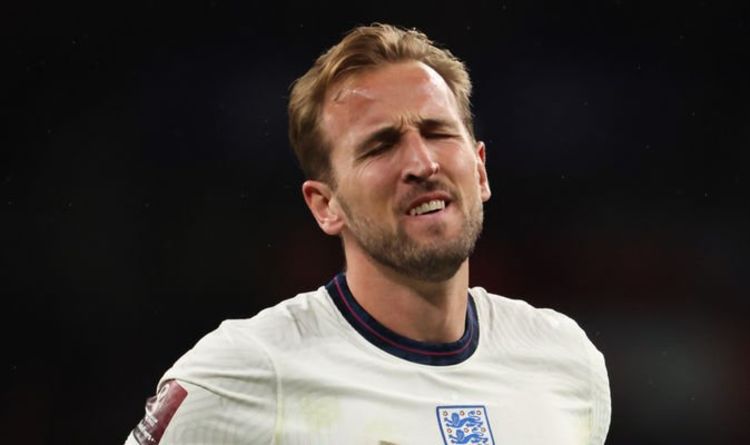 Tottenham and England striker Harry Kane struggled once again on Tuesday evening, becoming a passenger against Hungary when his side desperately needed a goal. Interest from Manchester City during the summer seems to still be playing havoc with the Three Lions captain, who is yet to notch a single Premier League goal this campaign.

England could only thrash out a 1-1 draw at Wembley, with a John Stones goal from a set-piece all that they could muster against a well-drilled opponent.

Kane was hoping to add to his growing international tally having sat out the previous tie with Andorra, but to no avail.

It brought end an incredible run to an end whereby the Spurs marksman had scored in every England qualifying game since 2017.

The end of such a hot streak is a sign of his poor form, which has perhaps uncoincidentally fallen after a dramatic summer when he made headlines on a regular basis.

JUST IN: Chelsea could pay the price for Tammy Abraham transfer but have an ace in the hole

Harry Kane had an ineffective game against Hungary (Image: GETTY)

Manchester City boss Pep Guardiola is an outspoken admirer of Kane, and the Englishman made his desire to leave north London apparent with silverware hard to come by.

The 28-year-old requested a transfer away from Spurs back in May according to Sky Sports, but chairman Daniel Levy was unwilling to play ball.

An unrealistic price of £200million was placed on his head, and City decided not to pursue his signature.

Since then, the normally prolific goal-scorer has looked a shadow of his former self.

Newcastle 'set sights on Tielemans and Chelsea star' after takeover

Harry Kane and Jack Grealish were both substituted during the second half (Image: GETTY)

Although he committed his immediate future to Spurs towards the end of the summer, his previous desire to leave will not be forgotten.

As he creeps ever-closer towards his thirties, it becomes increasingly important that the player gets the move he wants while still in his prime.

Kane is no stranger to slow starts, having famously gone until 2018 without an August goal in the Premier League, although his performances so far have been worrying.

Whether City will re-ignite their interest in January remains to be seen, but it may take a move away for the goal-machine to get his cutting edge back.