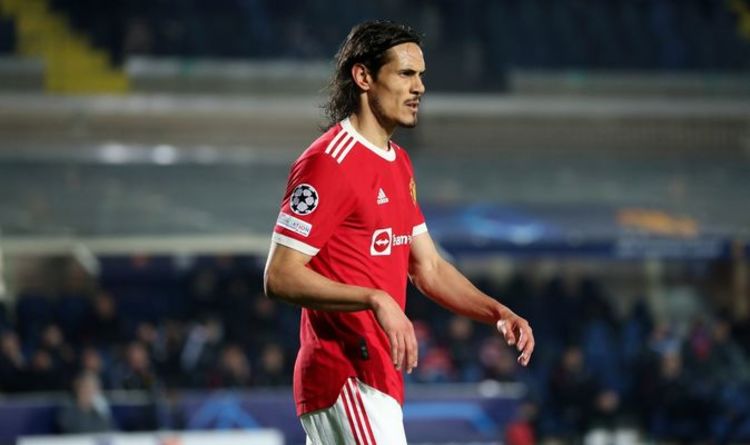 Ralf Rangnick's appointment at Manchester United on Monday has given the Red Devils plenty to be pleased about after a nightmare start to the season under Ole Gunnar Solskjaer. And certain players may have a future at the club who didn't before - including Edinson Cavani.

Cavani, 34, joined United at the start of last season on a free transfer from Paris Saint-Germain.

Having initially been signed as a rotational option alongside Anthony Martial, Marcus Rashford and Mason Greenwood, the Uruguayan quickly established himself as first-choice striker.

After scoring 17 goals in 39 games, Cavani stayed on for another season at United after impressing heavily at Old Trafford.

But this season he has found minutes hard to come by as Cristiano Ronaldo's signing has made him second-choice again, and he has only managed eight games in all competitions - with just one goal.

Edinson Cavani could be introduced to the starting line up (Image: GETTY)

Yet the sacking of Solskjaer and the implementation of a high-pressing style of play could very much reignite Cavani's United career.

Rangnick's spell at Schalke in 2011 saw him play Real Madrid legend Raul as his talisman, despite being 33 years old.

And his goals not only saved Schalke from the drop, but set the Gelsenkirchen-based club on their way to Champions League qualification the season after.

Rangnick's willingness to play experience in his short-term role before potentially focusing more on the long-term once he moves into a director's role at United could see the Uruguayan play more.

Cavani gave an update on his current injury following the international break.

"During this period of the international break, I've had the chance to stop and focus on this niggling injury that I'm feeling in the tendon in my leg," he told United's official website.

"So I can speed up my recovery and come back quickly and be available for my club and national team.

"So, during this time, I was able to spend a few days in Uruguay, do some fitness and recovery work and stuff and, in turn, I managed to see my family at the same time, which is always important, to see your family and be close to them."