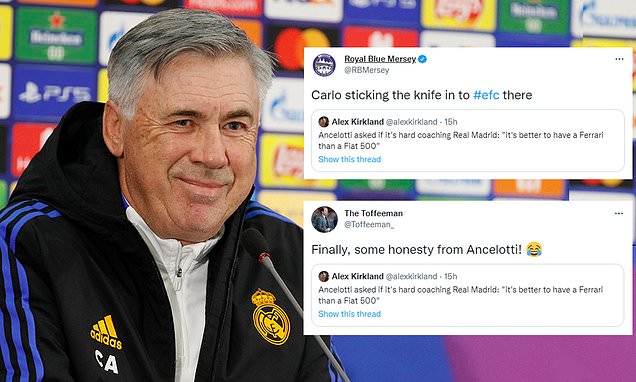 Carlo Ancelotti has this week risked the wrath of Everton fans by making a perceived dig at his former club and likening the Toffees to a Fiat 500.

Ancelotti left Merseyside in acrimonious circumstances in the summer, after jumping ship as soon as Spanish giants Real Madrid made it clear they wanted him to return to the Bernabeu.

Many Evertonians have still not forgiven Ancelotti for abandoning the club in favour of the Spanish capital, and now the Italian appears to have added salt to the wound with some choice words.

Speaking on Tuesday during Madrid's pre-Champions League press conference, Ancelotti was asked whether he finds it hard coaching Madrid.


Rather than reply with a stock answer or pay little heed to the question, the 62-year-old returned with a cryptic response which many now believe was a dig at his former club.

Ancelotti replied: 'It's better to have a Ferrari than a Fiat 500.'

It was no secret that Ancelotti found his first season in English football with the Toffees difficult, after initially embarking on a solid start to the campaign before entering a barren patch.

The Italian was given funds to bring in the likes of Allan and Abdoulaye Doucoure to bolster his midfield, while a move was also sanctioned to reunite him with his former Madrid jewel James Rodriguez - who has also since followed the Italian out of the exit door.

One fan simply pointed out on Twitter: 'Carlo sticking the knife into #efc there!.'

Ancelotti, whose team are top of the table, said coaching Madrid is like having a Ferrari

Another, taking a more frank approach, saw the funny side of things and wrote: 'Finally some honesty from Ancelotti.'

Other supporters, clearly not happy with the current regime and Everton's position in 11th, added: 'And this Fiat 500 has broken down with Benitez behind the wheel!'

To some people however, Ancelotti's words were received another way. One fan believed Ancelotti had actually slipped up and unintentionally outed himself as an incompetent manager who can only perform with 'Ferrari' level players at his disposal.

While he may have only managed a 10th place finish in the Premier League last season, Ancelotti currently has Madrid top of the pile in LaLiga, as things stand.

Los Blancos are a point clear of Real Sociedad having played one match fewer - with 30 points from 13 games and a vastly superior goal difference of 18.