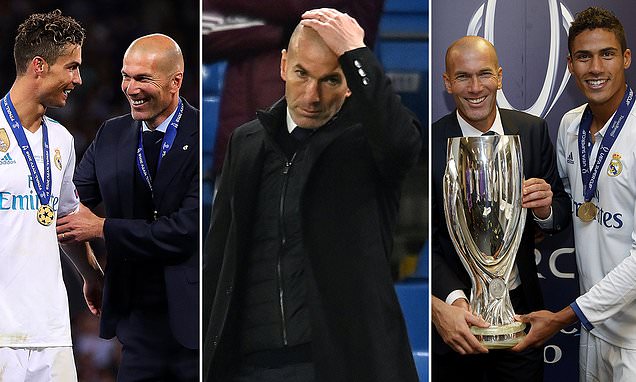 There are three problems with Manchester United trying to convince Zinedine Zidane to replace Ole Gunnar Solskjaer: he has no burning ambition to test himself in the most difficult of jobs; he is not especially driven by money; and he doesn't believe his English is good enough.

They are not insurmountable, but the first and the third obstacle in particular make persuading him to accept the job now in the middle of the season even more difficult.

If they manage it, what is clear is that he will have an immediate bond with at least three members of the first team. Cristiano Ronaldo, Raphael Varane and Paul Pogba would welcome him and help him.

One of the reasons he left Real Madrid the first time around is that he understood the club were selling Ronaldo. He urged Real Madrid to sign Paul Pogba on several occasions, first in 2016.


And his relationship with Raphael Varane goes back to 2011 when he called him up to persuade him to join the club instead of moving to Old Trafford.

Zidane would have a general in each line of the team and his charisma would certainly carry United through this difficult period.

There would be certain things that United would not be getting. He never really brought any marked improvement in young players during his time at Real Madrid. His failure to develop the 21-year-old Brazilian Vinicius and his 20-year-old compatriot Rodrygo has since been shown up somewhat by Carlo Ancelotti who has transformed both as first team starters this season.

And it's also bit of a myth that Madrid's football was always brilliant under him. When Real Madrid won the league in the 2019-20 season they won 10 of their last 11 games but six times by a one-goal advantage with three workmanlike 1-0 wins included.

The bar has been set low however and he would improve United's performances in the short term with uncomplicated tactics and a faith in the individual ability of the team's best players.

Intriguingly, the job that suits Zidane best if he is to go back into club management is at Paris Saint-Germain where the language would not be a barrier and where it's easier to win the domestic league and concentrate on his speciality – the Champions League.

That job, of course, is taken but there is belief that Pochettino might not be in it for the long haul in Paris.

That's the same Pochettino who has been offered the Manchester United job before and might be ready to take it if and when he leaves France.

Zidane it seems remains the number one target and three of the biggest names at the club might even be able to help convince him. The Glazers will need all the help they can get.

The job that suits Zidane best is PSG, and Mauricio Pochettino might not be in for the long haul