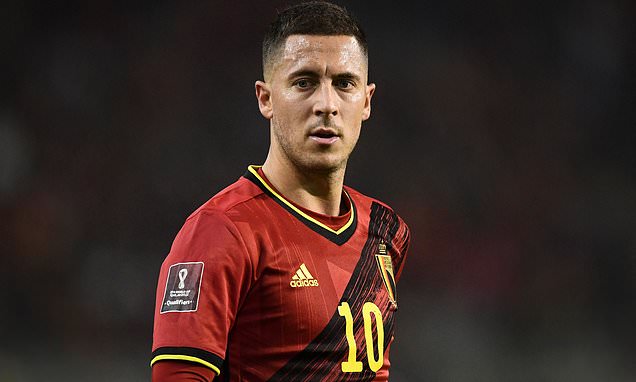 Eden Hazard has been forced to adapt his game due to his injuries in recent seasons, according to international team-mate Christian Benteke.

The Belgian has struggled with injuries since his £98m move from Chelsea to Real Madrid back in 2019.

Hazard has also struggled for form and though he has been fit and available this season, Carlo Ancelotti has often decided to start other players ahead of him.


As reported by Diario AS, he said:  'Hazard has a history of important injuries and now he avoids more contact in his game.

'When you have had a past like this, you subconsciously think of it. But it's not because he doesn't dribble past five or six men.

'He doesn't need to do that now to have a good game. Now he moves more intelligently on the field.'

Both Vinicius and Rodrygo have been relied on heavily by Ancelotti instead of Hazard this season.

The last two seasons have been frustrating for the Belgium international. He made just 16 top-flight appearances in his first campaign, although Madrid won LaLiga.

For the next year, Hazard played just 14 times in the league - with the club going trophyless. Under Ancelotti, he has now been pushed further out of the equation.

Despite his injuries, the 30-year-old still plays more often that not for his country when available.

He played just over 60 minutes during Belgium's 3-1 victory over Estonia on Saturday.

Hazard though will not be available for the game against Wales as he has been sent back to Madrid as part of pre-arranged plans between club and country due to his lack of game time for Madrid.