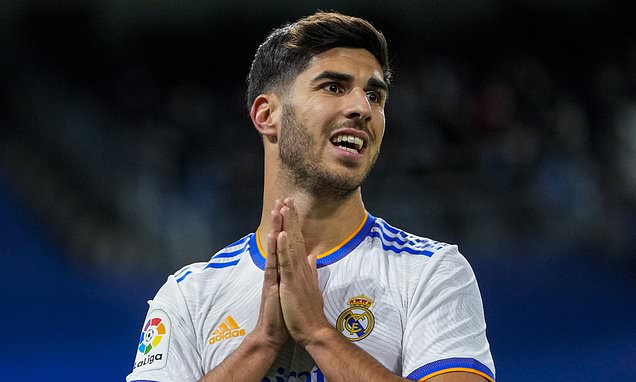 Steve McManaman believes Real Madrid star Marco Asensio would be better off joining Arsenal over Liverpool if he was to leave the Spanish capital in the summer.

According to reports from Spain, the Gunners and Liverpool are leading contenders to rescue Asensio from his Real Madrid nightmare, where he has now regressed into a bit-part player.

Former Real midfielder McManaman believes that Arsenal's ageing forwards, such as Pierre Emerick-Aubameyang and Alexandre Lacazette, would mean Asensio is likely to get more football in north London compared to Anfield.


‘His reputation was probably better two years ago when he first came onto the scene and scored a bunch of lovely goals, in the Champions League final against Juventus in 2017 in Cardiff and in the Super Cup, a lovely goal, against Barcelona.

‘But since then he’s had injuries and of course Real Madrid aren’t the team that they were four years ago, and his level has come off.

‘If he’s to leave in 18 months, it’s still a long, long way away. But I think he’s an Arsenal type of player, like an [Martin] Odegaard, who’s good on the ball, not necessarily really quick, but turns well, scores goals and makes chances.’

A combination of injuries and the sizzling form of Brazil star Vinicius Jr has resulted in Asensio being a lesser priority for Real boss Carlo Ancelotti, and now the Spanish forward is said to be considering the real possibility of engineering an exit.

This is according to fresh reports in El Nacional, who claim that Liverpool and Arsenal are in a queue of clubs eagerly monitoring the developments.

It's claimed that Asensio and his agent are convinced he should be getting more game time in the Spanish capital, and arewilling to use offers from the Premier League, Bundesliga and Serie A to force a departure if necessary.

It is reported that Borussia Dortmund happen to be early frontrunners for the forward should be leave, due to the club's 'strong relations' with the Madrid hierarchy.

Dortmund will likely have to replace Erling Haaland this summer, with the Norwegian ace poised to leave once his £68million release clause comes into play.

Asensio would be guaranteed game-time with the Bundesliga club, though also has an additional offer on the table from Juventus.