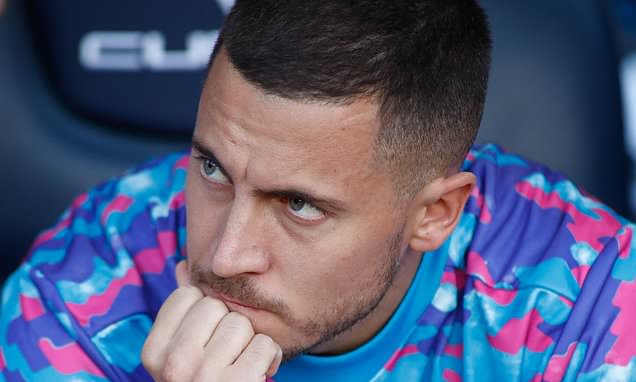 Eden Hazard has been told to 'put up' with the reality that Carlo Ancelotti 'prefers other players' as the Real Madrid coach issued a warning to the Belgian amid his limited playing time at the Bernabeu.

Hazard, 30, has failed to get going at Madrid since sealing his £150million switch from Chelsea two years ago, with injuries and consistency issues blighting the Belgian.

The attacker has been available for all but two games this season, with a muscular injury ruling him out for games against Shakhtar Donetsk and Athletic Bilbao, yet Ancelotti has largely snubbed Hazard thus far.

The Belgian, 30, has started just five games in all competitions under the Italian this season

Hazard has started just five games this season and was an unused substitute during Madrid's El Clasico victory over Barcelona on Sunday.


And former Everton boss Ancelotti says that Hazard must accept the fact that he prefers the likes of Vinicius Junior and Rodrygo to the £150m man at present.

'He has absolutely everything but he has to put up with the situation,' Ancelotti told the Spanish media. 'Right now he has a coach who prefers other players.'

Ancelotti's comments appear to confirm that Hazard's omission from his best XI is not solely down to concerns over the Belgian's fitness.

Madrid legend Fernando Morientes told Sportsmail that Madrid will not wait forever for the diminutive attacker to rediscover his best form in Spain.

'We know Hazard is very good, but there will probably be a time when Real Madrid will have to make a decision.

Ancelotti says Hazard must accept that he prefers other players, with Rodrygo and Vinicius Junior currently occupying starting berths alongside Karim Benzema

He added: 'They have waited two years for him to reach his top level. This year was a year in which the club, the fans and his team-mates expected the best Hazard but he hasn't started in the best way possible.

'Waiting so long for a player that was so good at Chelsea... Real Madrid may have to decide they won't wait any more.'