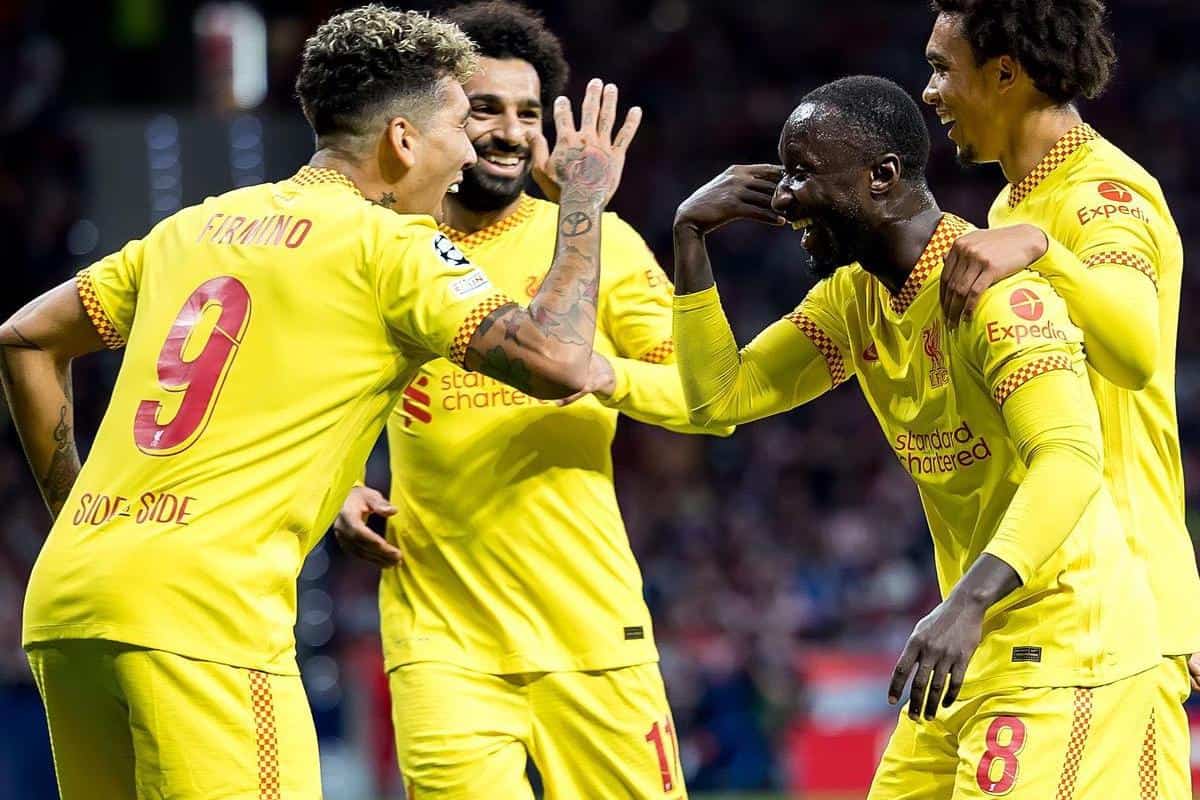 The Spanish capital and the Wanda Metropolitano will always have a place in the hearts of Reds across the world, whether they made the pilgrimage to the 2019 Champions League final or not.

Familiar streets, sights, scents and the same boozer where a nondescript stranger bought you a pint as a “toast to Divock.”

But Madrid isn’t purely about the nostalgic feelings of glorious yesteryear, it’s very much the here and now.

Since Jurgen took his merry men to Spain just over two years ago to compete in the showpiece finale, Liverpool arrived not only as contenders but firm favourites.

European football, at the pinnacle moment of the competition, and with all the expectance of becoming champions. It was the doubters to believers formula the German had preached since day one.

Liverpool have been back twice since, with Tuesday evening the latest instalment in a love affair with a city which produces special moments.

Madrid has now become synonymous with Liverpool’s European success of the modern era, and the club’s standing among the elite.

Arriving in the winding streets of the Puerto del Sol district of Madrid in the days prior to the match, it became immediately clear this proud city was ready and willing to host once again.

Though with everywhere right now, a covid-scarred landscape remains. Travel is of course more difficult, accommodation regulations are fast becoming a minefield and the swathes of tapas bars dotted across street corners now reveal a blur of mask-clad faces.

None of this, however, stopped the noise or adulation of the European away day. The Reds on tour, once again.

In the aftermath of Liverpool’s 2019 win, Atletico Madrid’s official social media account scored some nifty kudos points by tweeting out a picture of the Wanda and declaring that the Reds will always have a second European home.

It was classy stuff and worked a treat. Many parallels have been drawn between Liverpool and Atleti down the years, as the two clubs with fanatical fanbases waged war on the superpowers of their respective domestic leagues, often falling way short in the process.

Atletico trailed Real Madrid and Barcelona much in the same way that the Reds lacked behind United, Chelsea and Arsenal.

Yet just as with Atleti, Liverpool believed and firmly knew that at some point, some time soon, the perch would be climbed back upon.

In many ways the meeting of the two clubs this week was a unified celebration of those many years of struggle. Atletico hosted the match as reigning Spanish champions, while the trophy cabinet at Anfield has of course very recently hosted Premier League and Champions League honours.

Liverpool’s miraculous surge to a third-place finish last season to retain European football in its elite form, despite a half depleted side of academy offshoots and makeshift loanees, was very much vindicated here at the Wanda beneath a piercing full moon.

Hat tips must go to the likes of Nat Phillips, Rhys Williams and Ozan Kabak as the Reds reacquainted themselves with blissful Spanish surroundings and set to work in ruthless fashion.
Earlier in the day, Liverpool fans and loyal Atleti followers had sat side by side in the city’s famous Plaza Mayor.

All four corners of Madrid’s historically significant square had boasted Kopites in various levels of high spirits. No animosity between either set of supporters, just a happy acceptance at being two of the best sides in the competition.

Not the first time this city has been red. pic.twitter.com/CQO7vQntIB

Platters upon platters of glazed Iberian ham were whisked from table to table, never too far away from several follow-up pints. This is football properly returning as the world continues to come to terms with the new post-covid normal, and by god it’s nice to see. It’s been badly needed.

As chants bounced off the walls, paying homage to the majority of the current squad before stretching back to a few topical niche classics, Luis Garcia and his faithful Sangria, and Maxi Rodriguez running down the wing, one specific anthem made a cheerful, sun-baked square of football supporters momentarily unite as one.

A chorus of the classic Fernando Torres anthem, eulogising about “Liverpool’s number nine” was met with rapturous applause from all locals; fans, dog-walkers and bartenders alike.

The baby-faced boy from this very city may have hugely divided opinion at both clubs when he left for pastures new, but the symbol of hope he offered to both Liverpool and Atletico during his respective stints provided a nice reminder of how far the two clubs have come.

Neither now boast a blind, hopeful reliance on one star prodigy. The two sides are solid and now have proven winning pedigree. Travelling up to the Wanda, however, it became clear just how feared Klopp’s men are.

Metro conversation, in a friendly Spanish-English Spanglish hybrid, soon pointed out that many home fans would take a point off the Reds and run for the hills. Liverpool aren’t ‘the team to beat’ in Group B… they are the team to hopefully take something from.

Atleti knew this, even in their own backyard. Diego Simeone would have known it as well, and he’ll soon realise snubbing Klopp on the touchline will never go down as a good look. But that’s a yarn for another day.

In the end it was Liverpool, with flashes of vibrant yellow, serving up another thrilling European night. Sure, it wasn’t the best performance and a hearty sprinkling of VAR intervention served to keep the neutrals happy, even if the travelling Kop locked away in the upper reaches of the Wanda didn’t have much clue as to what was going on.

Yet still the chants sounded, rolling down the tiers of what is one of Europe’s most dazzlingly impressive football stadiums, and out onto the pitch where a Liverpool side humming with confidence just knew it was going to get the job done.

Three games, nine points, giants of Italy, Portugal and Spain dispatched. The job is by no means done, but it’s hugely impressive stuff from a side who were written off at the start of the season… remember that?

Now back to domestic affairs and the small matter of United away on Sunday. Another small chapter in Madrid concluded for the Reds but for now… or at least before this looming flight back home, another round of tapas and a pint for Jurgen’s gritty battlers. Who knows what this season is bringing.