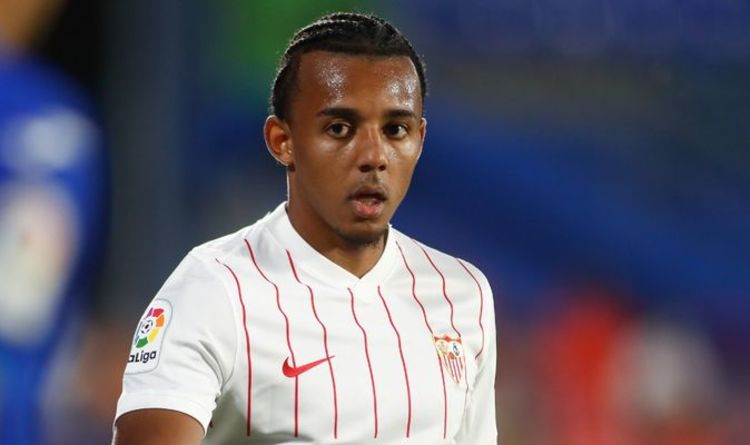 Sevilla defender Jules Kounde would prefer to join Real Madrid ahead of Chelsea if he is sold by the Andalusian club next summer, according to reports. The 22-year-old came close to signing for the Blues over the summer but was ultimately denied the chance to test himself in the Premier League with the west London outfit.

Kounde was identified by Chelsea as their main defensive target, with Thomas Tuchel eager to improve his ranks at the back in advance of a renewed title challenge.

The player reportedly agreed personal terms with the European champions with over a month left to run in the summer window, but the move eventually failed to come to fruition.

Chelsea were reluctant to meet Kounde's release clause, which stands in the region of £68million, while Sevilla were unwilling to negotiate a lower fee for his services.

The Frenchman stayed in Spain as a result but looks set to move on sooner rather than later, with the Blues expected to go back in for his signature next summer.

However, they are unlikely to be the only club in the race to land Kounde, with Real Madrid also understood to be keen admirers.

It even seems as though Los Blancos could have the upper hand if the move comes down to Kounde's personal preference ahead of next season.

The defender would rather join the La Liga heavyweights than seal a Premier League switch to Chelsea, according to Defensa Central.

The report claims that Real Madrid are determined to sign a new centre-back ahead of next season, with Antonio Rudiger and Kounde their priority targets.

If they are unable to land the former on a free transfer, it is said that a part-exchange deal for the Sevilla star could be an option for club president Florentino Perez, who is also hesitant to meet the player's lucrative release clause.

Kounde is believed to have told his representatives that he was keen on joining Real Madrid last year and is still eager to seek a new challenge in spite of his failed summer move to Chelsea.

It remains to be seen whether he will make the switch to the Bernabeu in time for next season, with the Sevilla man still under contract until the summer of 2024.

Sevilla director Monchi revealed back in August that Chelsea simply came up short in their attempts to land Kounde but conceded that the defender's head was turned by the interest in his services.

"We weren't satisfied with the offer and it was linked to Chelsea selling a player. It was a decent fee, but it didn't meet our criteria.

"We haven't spoken with Chelsea since Friday night [August 27]. We all decided that it was best Jules didn't travel to Elche.

"It's normal for players to be affected by news of any kind. Last year he had the interest from City and now Chelsea this year."