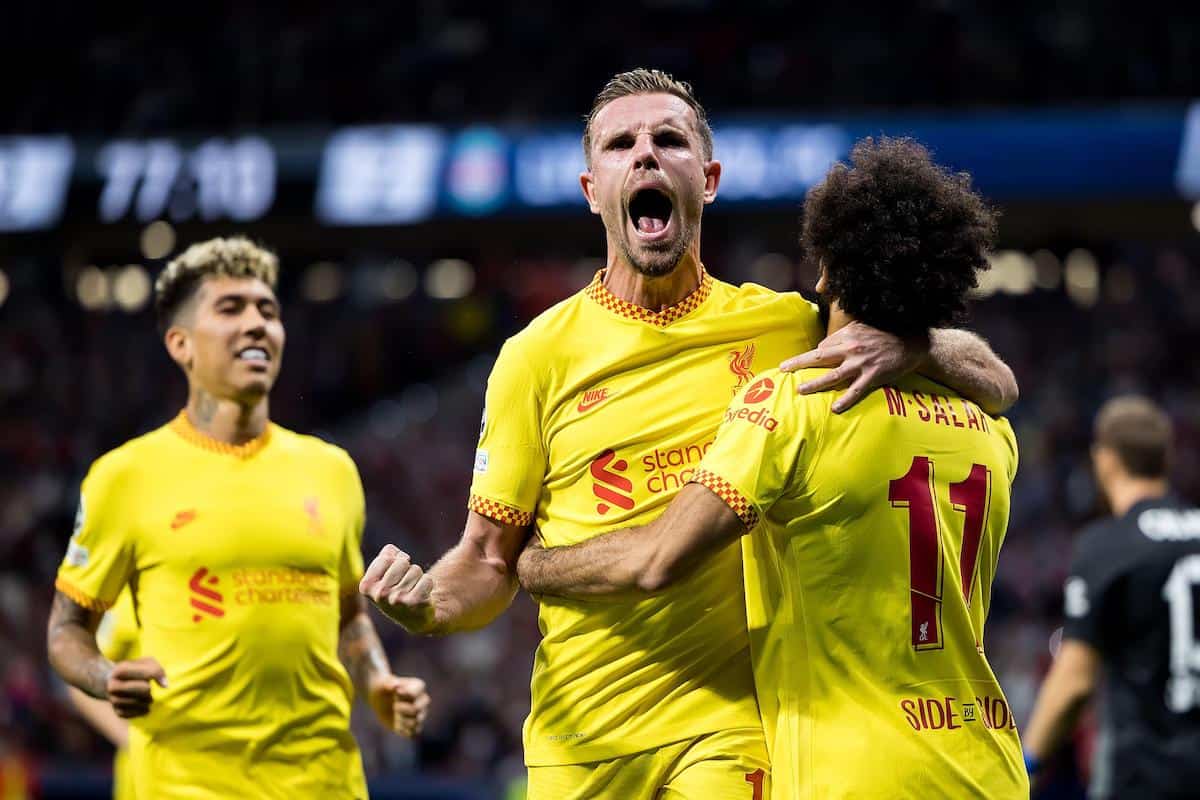 Liverpool’s return to Champions League action was suitably ludicrous, winning in the stadium we last lifted Big Ears against the team who then went and knocked us out the next season.

But the performance levels in the other two games so far in the ground stage have wavered alarmingly between champions of Europe standard, and champions of Vanarama National League North standard.

Against Milan, we blew them away – only to trail at the break after a crazy drop-off in concentration and defensive organisation.

Against Atletico here, almost the same – the variation being we’d put two chances away beforehand. Once they notched their first though, it was again wide open to counters, struggling to close down passes from deep to set forwards through one-on-one and not winning tackles in our own half of the pitch.

The rest of the game was similarly up-and-down, no real control and certainly no clear route to victory – until Mario Hermoso did his best impression of Martin Skrtel and hauled down Diogo Jota for no reason.

We’ll need to be more composed, more certain, once we’re into the knockouts.

Thunder and lightning, and very, very frightening – for his team-mates.

Keita’s goal was superb, similar to his Palace strike in ferocity and confidence, plus unstoppability. Not many players beat Jan Oblak from that distance.

But for both Atleti goals he was culpable first and foremost, failing entirely to prevent dribblers bypassing him and picking a vital pass at the end of the run.

It simply isn’t allowed in Liverpool’s set-up that players are beaten one-vs-one like that – it forces the rest of the team either out of shape to make up the space, or else leaves them vulnerable to passes into those same gaps.

No surprise, then, that he was hooked at the break – which was three minutes more than he lasted last time in Madrid, against Real in April.

That is now nine successive matches in which the irrepressible Mohamed Salah has found the back of the net – no other LFC player had ever managed that feat before.

It’s 11 goals in that run, plus a couple of assists, and his ongoing durability, reliability and absolute insistence that he must find the net is both a huge relief for the Reds and hugely impressive to keep watching.

The first goal was deflected, sure – off Kondogbia not Milner as it turned out – but the run beforehand looked almost mundane in contrast to recent strikes: just the three defenders left in his wake in a Robben-esque race across the edge of the box.

After recently missing a penalty too, it was great to see him find the back of the net once more in cool and composed fashion.

The biggest call Klopp made pre-game was to not select Fabinho in the line-up, nominally due to the fact he wasn’t able to do a team shape training session prior to the game.

Perhaps that’s down to the Reds, to an extent. Yes, he had to fly straight to Spain and not be with the squad beforehand, but either perhaps the Reds could have flown a little earlier than usual to get a session in with him (and Alisson), or else we could have not worried about the world seeing us line up in the same 4-3-3 shape as always and just done the session in Madrid anyway.

Or perhaps Fabinho could have just played anyway, given he knows the role inside out and is one of the most vital players in the team from a tactical perspective.

While we’re on the subject of Brazilians, Alisson was beaten twice but was superb – two or three remarkable stops, one-on-one, to keep us ahead or in the game.

Rest of the group and onto OT

Simple, small game next: Man United away. In theory, we should wallop them; in practice, we’ve often struggled to find our A-game when heading to Old Trafford in recent seasons.

Take the game to them as we can and they will not be able to live with Jurgen’s Reds, but be as open as we were at the Wanda in the first half and they have the attackers to cause serious damage too.

Meanwhile, we’ve reached the halfway point in Europe. Alles gut, as Jurgen might say. This match was effectively a freebie: the hardest match away from home having already picked up six points from six.

Nine from nine, five points clear, and we’ve one foot already in the last-16. Beat Atletico on home soil and it’ll be assured, allowing Klopp to rest players and rotate as he wishes in the last two, as well as keeping players fresh for the league matches beyond.