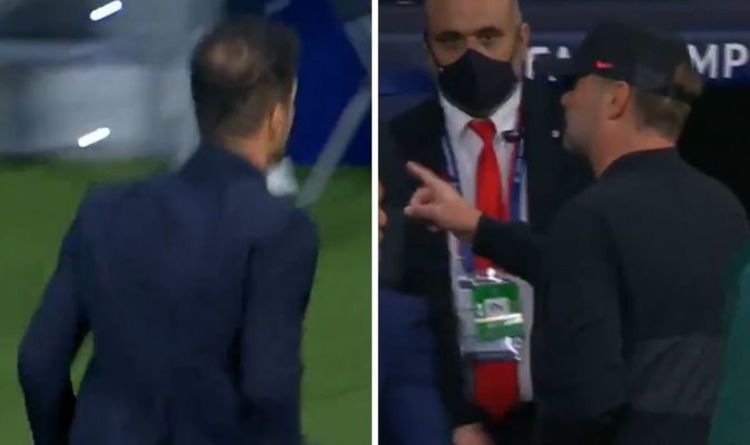 Liverpool ran out winners in an enthralling end-to-end encounter at the Wanda Metropolitano to give themselves three wins from three in their Champions League group.

The Reds went 2-0 up thanks to superb strikes from Mohamed Salah and Naby Keita, but soon surrendered their lead thanks to a quick-fire Antoine Griezmann double.

Yet following the Frenchman's debatable sending off, Liverpool's one-man advantage meant they took the lead through another Salah strike - again through a contestable penalty.

And when Atletico had their own penalty awarded at the end, VAR overturned it - visibly making Simeone feel extremely aggrieved as he ran down the tunnel much to Klopp's anger.

Klopp was seen wagging his finger at Atletico chiefs at Simeone's decision to sprint straight back to his dressing room.

BT Sport's panel didn't hold back in their criticism's of the Argentinian, with Darren Fletcher saying "Jurgen Klopp was definitely annoyed by that".

And Peter Crouch shared the same feeling, claiming that it wasn't good enough from such a decorated manager.

"You’re so caught up you forget the VAR, penalties, all the goals, there was so much drama and not even a handshake at the end of it," Crouch said.

"Got to respect him so much as a manager [Simeone], during the game winding the crowd and the players up, I understand it.

"But not shaking hands at the end, I just think he lets himself down."

Joleon Lescott echoed his thoughts, claiming Atletico's most successful boss was cowardly in his actions.

"The comments from Jurgen Klopp before the game, he didn’t seem phased by it - but tonight he didn’t shake his hand to run off down the tunnel, and that is quite cowardly in my opinion."

Jurgen Klopp was left bewildered by the snub (Image: GETTY)

Liverpool take on Atletico in the return fixture on November 3 at Anfield in a bid to continue their spell of dominance in the group.

The Reds would mathematically qualify from the group should they beat Atletico.

And they would win the group with two games to spare should AC Milan take points off Porto.