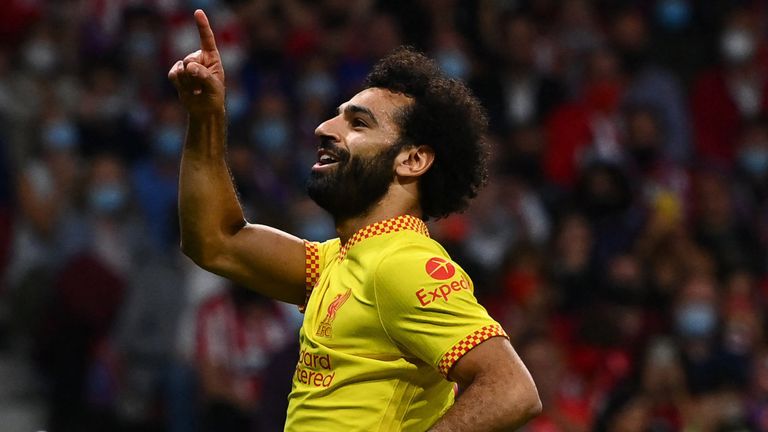 Mohamed Salah scored twice as Liverpool eventually won a thrilling Champions League battle with Atletico Madrid 3-2, in a game which featured an Antoine Griezmann-inspired two-goal comeback from the hosts before he was sent off, and then late VAR drama when the Spanish side were awarded a penalty.

In a clash that felt more like a decisive knockout tie than a group stage match, Liverpool raced into a two-goal lead, with Salah capping a wonderful dribble with a deflected drive past Jan Oblak (8) to score for the ninth game in a row, before Naby Keita crashed a superb volley home from a half-clearance.

Atletico fought back brilliantly, though, with Griezmann justifying his selection ahead of Luis Suarez, who surprisingly began on the bench, with a quick double of his own.

The Frenchman turned in from close range after a corner (20) and then arrowed in his second (34) from the edge of the box, with Atletico benefitting from loose marking from Keita in the build-up to both goals.

The equaliser sparked wild celebrations from Atletico boss Diego Simeone and it could have been worse for the visitors at the break, with Alisson pulling off three sharp stops to keep out Griezmann, Joao Felix and Thomas Lemar during a chance-filled first half.

But on 52 minutes Griezmann was shown a straight red for a high boot on Roberto Firmino and, although the 10 men of Atletico defended admirably, Salah (78) restored the visitors' lead from the penalty spot after a senseless shove from Mario Hermoso on Diogo Jota undid that good work.

Jurgen Klopp's side almost squandered their position again when Jota leant into Jose Gimenez at a free-kick and sent the Atletico man tumbling but after a spot-kick was awarded, referee Daniel Siebert overruled his own decision from a pitchside monitor following a VAR check, infuriating the home fans inside the Wanda Metropolitano.

It was the first time they had seen their side lose a home European game for four years and Simeone raced down the tunnel at the final whistle. But the victory maintained Liverpool's 100 per cent start to the Champions League this season, keeping them top of Group B.

Players of the match: Alisson.

Disappointingly, there were boos from the home supporters before kick-off as Liverpool's players and Atletico's Kieran Trippier and Yannick Carrasco took a knee, but once play got underway the intensity of the early action lived up to what was otherwise an electric pre-game atmosphere.

There were tackles flying in from the home side but the Liverpool XI - their oldest since September 1953 at an average of 29 years, 130 days - relished the contest, and incredibly were two up inside a quarter of an hour.

First the currently untouchable Salah skipped past three Atletico defenders before his shot was diverted in off midfielder Geoffrey Kondogbia, and then Keita - who scored a stunner against Crystal Palace earlier this season - hammered in another thumping volley from 20 yards.

Atletico had only lost one of their last 40 in all competitions at home before this clash, though, and it didn't take them long to hit back, with Lemar beating Keita too easily from a short corner before Koke's drive through a crowd of bodies was glanced in by Griezmann.

The Frenchman almost came up with an equaliser on 28 minutes when he raced through on goal beyond Virgil van Dijk but Alisson was quick off his line and made a sharp save from the one-on-one - but he soon had his second.

Joao Felix was afforded too much space - with Keita again culpable - before finding Griezmann on the edge of the box and he was allowed by Van Dijk to touch and turn before firing into the bottom corner.

Joao Felix and Lemar then tested Alisson from tight angles as Atletico pressed for a third before the break.

Klopp acted during the interval to try to stem the flow of attacks by sending on Fabinho for Keita but was again thankful for his 'keeper, with Alisson stopping Carrasco's shot, after Sadio Mane's header had been tipped away at the other end.

But the contest changed dramatically seven minutes into the second half when Griezmann, watching a high ball come over him, caught Firmino in the face with a high boot and was shown a straight red card for dangerous play.

Image: Antoine Griezmann is shown a red card for his high challenge on Roberto Firmino

Van Dijk headed at goal, Andy Robertson shot over and sub Alex Oxlade-Chamberlain saw an effort saved as Liverpool looked to make their advantage count but Atletico's stubborn resilience was eventually undone by their own man, with Hermoso's reckless foul on Jota allowing Salah to capitalise.

There was more drama still to come, with Atletico's penalty award overturned, despite Jota making contact with his forearm on Gimenez's back, and Liverpool survived even a late Suarez shot, which flew just over, to earn their first ever win over the Spanish side at the fifth attempt.

Next up for Liverpool is a trip to Manchester United in the Premier League, live on Sky Sports Premier League on Sunday from 4pm; kick-off 4.30pm.