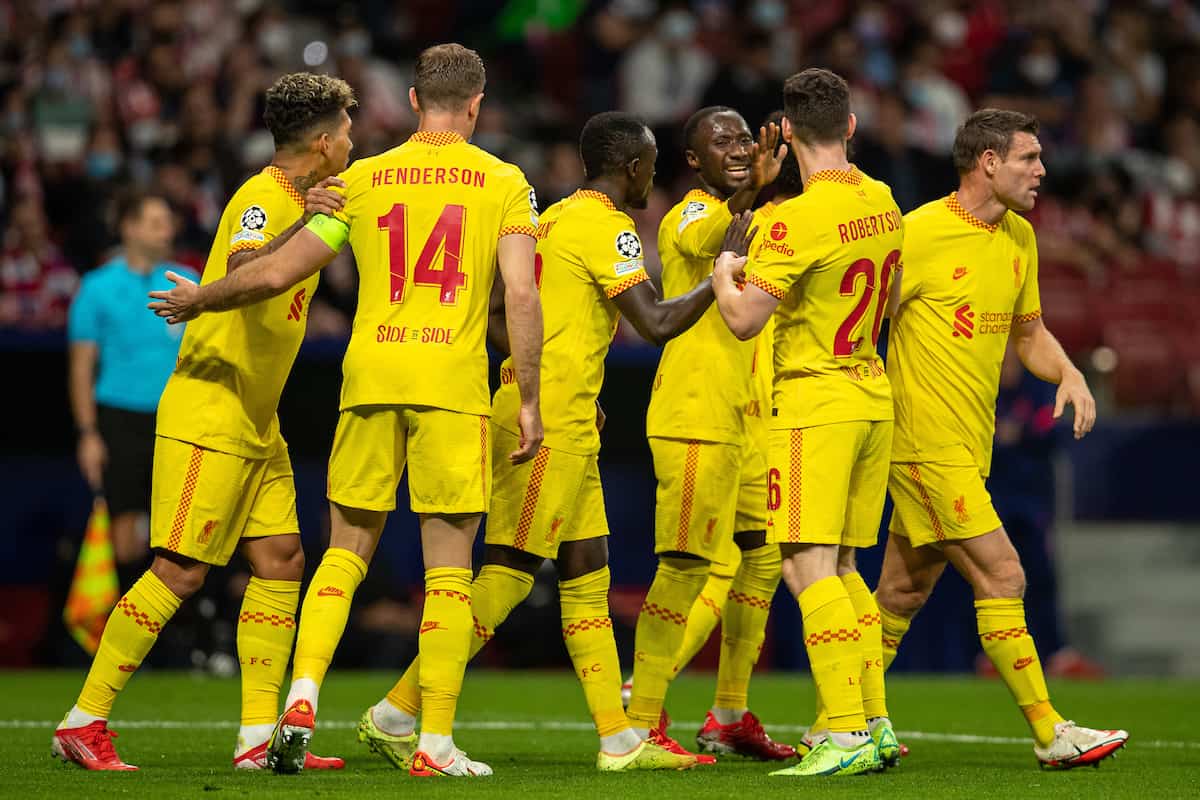 Liverpool clawed their way to a 3-2 win away to Atletico Madrid on Tuesday night, in an ugly display with few standout performers within Jurgen Klopp‘s side.

After time away from the squad, it was a mixed start for Alisson: a clutch of big saves, including one on Antoine Griezmann before the scoring began, along with a bizarre clearance that almost handed the Frenchman a goal.

However, the Brazilian was vital on a number of occasions, keeping the Reds in a tight game and giving them the platform to – with more than a measure of luck – take the three points.

Many of Atletico’s attacks were funnelled down his side, and Alexander-Arnold needed support in dealing with the dangerous Joao Felix.

A second-half booking, for attempting a shot after the whistle had gone for a free-kick, rattled him and he started to sulk, overhitting passes that weren’t on and neglecting his defensive duties.

Still, it was one of his lofted balls that led to the penalty for 3-2, so it wasn’t all bad for Liverpool’s No. 66.

It was a backs-to-the-wall performance from Matip and Virgil van Dijk next to him, and the No. 32 needed to stay sharp throughout up against two energetic strikers.

Very unlucky to not see Griezmann’s opener ruled out given an offside Thomas Lemar was impeding him.

It’s widely accepted that Van Dijk will take time to reach his pre-injury levels, and this was a difficult game for the Dutchman as Diego Simeone took a leaf from the Brentford playbook.

But he grew in strength as the minutes wore on, and he and Matip found stability as a pairing once more, aided by the introduction of Fabinho at the break.

Did the occasion get to him? It was a shaky performance from Robertson down the left, with poor touches and questionable positioning.

With Atletico rarely attacking down their right, however, the flaws were easier to mask.

Began the game in the No. 6 role before moving upon Fabinho‘s entry, though in both positions he struggled to impose himself in a flooded midfield.

There were some smart flicks and nice interchanges with the likes of Mo Salah and Naby Keita, but the complexion of Liverpool’s three-man midfield did not flatter any of Klopp’s starters.

Something of a wildcard in the side with Fabinho not deemed ready to start, and a thumping volley to put Liverpool 2-0 looked to set Keita on course for a big night.

Unfortunately, the balance of Klopp’s midfield did his No. 8 no favours, and Keita was particularly culpable as Atletico restored parity before half-time – which led to his substitution.

The thinking behind the vice-captain’s inclusion was clear, with this being a big game needing big-game players, but it seems to have been an appearance too many for Milner.

There was a tiredness to his play, shown as he twice passed the ball out for a goal kick with nothing on in front of him, and he was hooked soon after picking up a booking.

Don’t let Mo Salah cut inside onto his left. It should be a simple instruction for one of the most well-drilled sides in Europe.

To be fair, after he beat three players and scored for his ninth consecutive game, Atletico dealt well with Salah for much of the game – only for the Egyptian to keep his cool and fire in the decisive penalty.

Enjoyed his running battle up against Kieran Trippier, but was not as influential as he could have been in building up attacks in the final third.

He made the fewest touches of any of Klopp’s starters, and was duly substituted just after the hour mark as Diogo Jota took his place in attack.

Was barely involved until he got a set of studs to the temple early in the second half, and fittingly the numerical advantage allowed him to make more of an impact.

The final half-hour saw him drop deep and keep things ticking over, while there were opportunities for both him to get forward and feed passes through to the likes of Salah, though his final ball was at times lacking.

Fabinho (on for Keita, 46′) – 7 – Should have started, in hindsight. His nous helped change the game.

Alex Oxlade-Chamberlain (on for Milner, 62′) – 6 – Much brighter than in recent cameos, going close with one smart move.

Diogo Jota (on for Mane, 62′) – 6 – Bizarrely fouled for Salah’s penalty, before almost repeating the tackle at the other end.

His hands were tied to an extent with his selection in midfield, with Curtis Jones and Thiago both injured, but the decision to omit Fabinho was a questionable one.

Keita was always likely to struggle with the intensity of the game, and thankfully the manager saw fit to address the situation as early as half-time.

Otherwise, there could be few complaints, with Klopp similarly proactive in substituting both Milner and Mane, while he was right to bring on Gomez and Williams to hold firm late on.