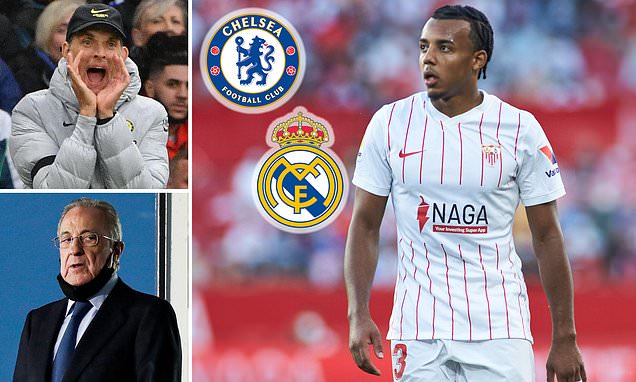 Real Madrid have stepped up their interest in Chelsea target Jules Kounde after seeing the defender prove his versatility by playing at right-back for France against Spain.

Real were among several cubs chasing Kounde last summer but were put off by Sevilla's valuation of the centre-back.

Chelsea came closest to snapping up the defender and made a £43million offer for him before Sevilla demanded £56m to part ways with the player.

And according to fan site Defensa Central, Real are set to provide extra competition should Chelsea look to make another move for the 22-year-old next summer.


Real and Chelsea are both looking to sign a top class centre-back in 2022.

Real lost two huge players last summer in Sergio Ramos and Raphael Varane and only made one new addition in centre-back by signing David Alaba.

Chelsea, meanwhile, could be set to lose Antonio Rudiger as the German is into the final year of his contract at Stamford Bridge and will be able to choose his next destination from January ahead of a free transfer in the summer.

Real are interested in bringing in Rudiger as a free agent after pulling off a similar move for Alaba but they are also keen to sign Kounde.

And they have increased their interest in the Frenchman after watching him perform admirably on the right side of defence for France in the victorious UEFA Nations League campaign.

Kounde played on the right side of a back three for Didier Deschamps side and was a key performer as the world champions came from behind to beat Belgium 3-2 before pulling off another comeback to overcome Spain 2-1 in the final.