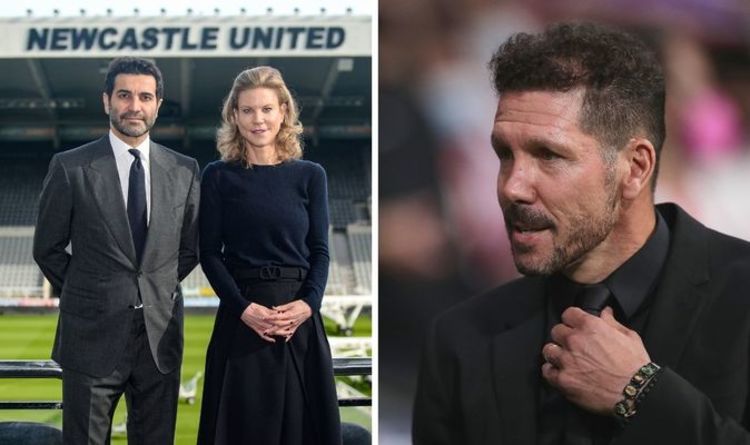 Newcastle's new Saudi owners are said to be probing the capture of Atletico Madrid's sporting director Andrea Berta and the Magpies hierarchy dream that Diego Simeone will follow him to Tyneside, reports in Spain claim. Lucrative plans are already being mapped out by the new board at St James' Park following the Public Investment Fund's (PIF) £305million purchase of the club and a new manager is understood to be first on the agenda.

Newcastle are ready to pay £8m to sack Steve Bruce but they want to ensure his replacement is already lined up before they pull the trigger.

There has been some suggestion that current assistant manager Graeme Jones could take temporary charge as caretaker boss until the end of the season before a permanent appointment is made.

However, Newcastle co-owner Amanda Staveley has already raised the consortium's immediate concerns that the club are facing a fight to preserve their Premier League status.

The Magpies are expected to spend from January and there is hope that some new faces could help steer the club away from danger.

Nonetheless, long-term plans are already being drawn up in the boardroom and according to Spanish outlet AS, Newcastle want to bring in Atletico chief Berta as sporting director.

The Italian has arrived at the club in 2013 following his departure from Genoa and has helped provide support for Simeone from two upstairs roles: Technical director and sporting director.

Manchester United are among those to have weighed up a move for the 49-year-old, who has helped Atletico win two La Liga titles in the past seven years.

Yet the report adds that Newcastle also want Berta to bring Simeone with him to the North East as part of the club's Saudi revolution.

El Cholo is currently the highest-paid coach in world football, netting a reported £36.2m per year.

However, Simeone remains committed to his long-term project at the Wanda Metropolitano and his current deal runs until 2024.

His dream remains to win the Champions League with Atletico, a goal he has come close to fulfilling on two occasions following defeats in the final to Real Madrid in 2014 and 2016, respectively.

It's claimed Newcastle's new owners first reached out to Berta back in early 2020 when they first attempted to complete the takeover.

The mega £305m deal was blocked though that April before it was finally given the go-ahead just under two weeks ago following Saudi Arabia's lifting of the beIN Sports ban.

One manager who would seemingly not approve of Simeone is Jurgen Klopp, who prepares to face off against Atletico Madrid with Liverpool in the Champions League tonight.

The German has revealed he is not a fan of Someone's style of football, despite respecting him as a coach.

"Diego Simeone is doing absolutely everything right," Klopp ahead of his side's trip to Madrid, where they won the Champions League in 2019.

"He is the current Spanish champion. Very successful at [Atletico]. He has a bunch of world-class players, keeps them on their toes, they fight with all they have for their lives.

"That says a lot about the quality of Diego so I couldn't respect more what they do.

"Do I like it? Not too much but that is normal because I prefer a different kind of football. That's me. Other coaches prefer different styles of football. Nobody has to like it, it just has to be successful and that is what Atletico is for sure."