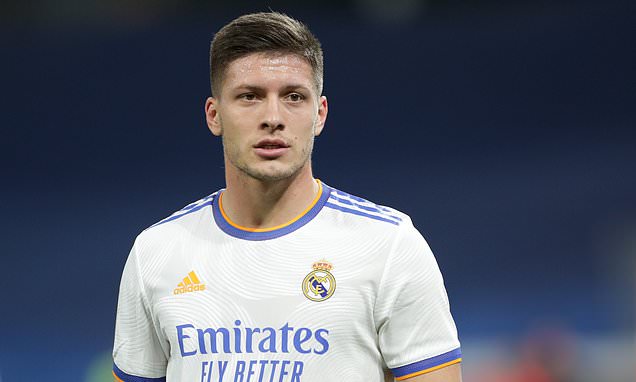 Arsenal are monitoring the situation of Real Madrid striker Luka Jovic with a view to line him up as Alexandre Lacazette's long-term replacement, according to reports.

French striker Lacazette has less than nine months left on his Emirates Stadium contract and could walk away from the Gunners on a free next June.

Serbian international striker Jovic, meanwhile, is enduring a tough time at the Santiago Bernabeu, having scored just twice in 38 appearances since moving from Eintracht Frankfurt for £50million back in 2019.

Arsenal are monitoring the situation of Real Madrid striker Luka Jovic, according to reports

And according to Fichajes.net, the 23-year-old Real striker is attracting Arsenal who will be on the lookout for a new striker should Lacazette move on at the end of the season.


Jovic is back at Real after spending the second half of last season on loan back at Frankfurt, though showed very little signs of resurrecting his previous form in Germany.

The Serbian striker scored four goals last season back in the Bundesliga though two of them came in his first game against Schalke, with the other two coming across 17 matches.

Jovic has played six times for Carlo Ancelotti's Real this term but has yet to find the net in any of them, with Karim Benzema still the main man up front for Los Blancos.

Lacazette, meanwhile, has only played 50 minutes of Premier League football for Arsenal this season, with his only two outings so far being goalless substitute appearances against Manchester City and Brighton.

The 30-year-old has performed much better in the Carabao Cup this season, scoring in both of the Gunners' victories against West Bromwich Albion and AFC Wimbledon.

Arsenal manager Mikel Arteta remained coy on whether Lacazette will commit to a new contract given his lack of game time, with the Frenchman able to start negotiating a pre-contract agreement with clubs in just two months' time.

Speaking in a pre-match press conference ahead of Arsenal's match with Crystal Palace, Arteta said: 'We are focusing on getting the best out of Laca and he shows every day his commitment is here.

'We just want to give him the right minutes so that he can show his quality and help the team to do better.'