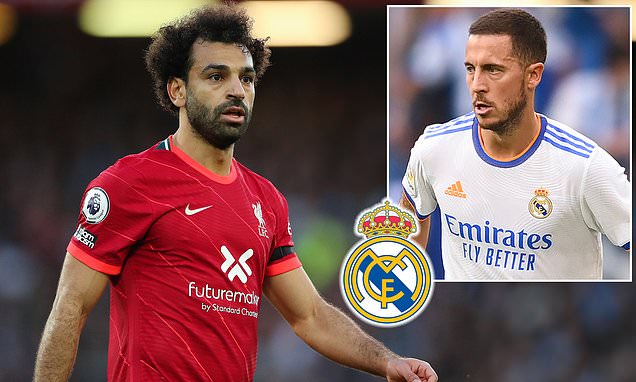 Real Madrid are reportedly considering an ambitious move in an attempt to persuade Liverpool to sell star player Mo Salah.

The LaLiga side have long been admirers or Salah who is still yet to resolve his contract situation at Liverpool.

There have been reports, as per ESPN, that Real Madrid could look to tempt Liverpool with a player-plus-cash deal involving former Chelsea star Eden Hazard.

The Belgian who for a long time was a thorn in Liverpool's side during his time at Stamford Bridge, has struggled since moving to the Santiago Bernabeu in 2019.


His first two seasons were largely plagued by injuries and this campaign he has been in and out of the team and has yet to register a goal in eight appearances.

It's been said that Real Madrid boss Carlo Ancelotti is considering ways to move the former Chelsea player on.

It could be difficult though for Madrid to tempt Liverpool to sell Salah, who is currently one of the most in-form players in world football.

The Egyptian has scored nine goals in nine appearances and showed his brilliance with a stunning solo finish against Manchester City before the international break.

Liverpool have tied a number of players down to new contracts in recent months but have yet been able to do so with Salah.

The Reds will be keen to tie him down to a new deal before the end of the season, with his contract set to expire in the summer of 2023.

Salah is believed to be happy to extend his stay at Liverpool but the club would likely have to hand out the biggest contract in their history to keep him at Anfield.

There has previously been reports that Salah could look for as much as £500,000-per-week, though any deal would likely be lower with the Reds current highest earner Virgil van Dijk, currently on a £220,000-a-week deal.