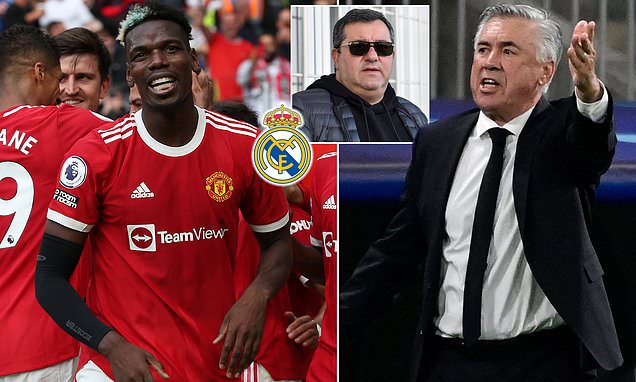 Real Madrid are ready to step up their efforts to land Paul Pogba as a free agent, should he opt to run down his contract at Manchester United.

Pogba's deal expires at the end of the season and he is yet to commit his future to the 20-time champions of England, raising the prospect he could leave for free in the summer.

If he doesn't agree to an extension, the Frenchman will be allowed to discuss terms and sign a pre-contract with a new club from January ahead of a move next summer.

According to ABC, Real are ready to offer him just under £12million-a-year with a transfer bonus of just over £25m to convince him to swap Old Trafford for the Santiago Bernabeu at the end of the season.


The Spanish outlet claims that Pogba's agent, Mino Raiola, is pushing for the deal to happen and that Real are hoping to pair Pogba and Kylian Mbappe with their France team-mate Karim Benzema.

Earlier this week, AS reported that the Spanish giants had been sounding out Pogba's camp for several weeks as they believe signing the United midfielder could facilitate Mbappe's arrival.

Like his France team-mate, the PSG star is out of contract at the end of the season and Real have made him their number one target.

However, both ABC and Mundo Deportivo noted that Real are unwilling to enter a bidding war for Pogba with other potential suitors.

While he has shone brightly on the international stage, Pogba's second spell at Old Trafford has been blighted by inconsistency and he has never quite managed to hit the heights he reached at Juventus.

Raiola has repeatedly hinted his client may leave Old Trafford, suggesting in the past that Pogba was 'done at Manchester United' and that he needed a fresh challenge.

This week, ESPN reported Barcelona were one of several clubs Raiola had spoken to about signing the 28-year-old on a free transfer next summer.

Juventus are also thought to be keeping an eye on their former star, who has contributed to muddy the waters about his future.

The 28-year-old won the Nations League with Les Bleus this month, beating Spain 2-1

'I always speak to my former Juventus team-mates, like Paulo [Dybala],' Pogba said last week, while in Turin for the Nations League semi-final.

'I'm in Manchester, I've still got a contract there for a year and then we'll see.'

United, however, are keen to keep Pogba, who has started this season on the front foot, delivering seven assists in as many Premier League games.

According to The Athletic, United have put forward a deal worth around £400,000-a-week.

The figure represents a £100,000-a-week increase on Pogba's current wages and would make him the second-highest paid player at the club behind Cristiano Ronaldo.