Gallery: Reds arrive in Madrid ahead of Atletico clash

Jurgen Klopp warns Liverpool that Atletico Madrid will 'EAT' them 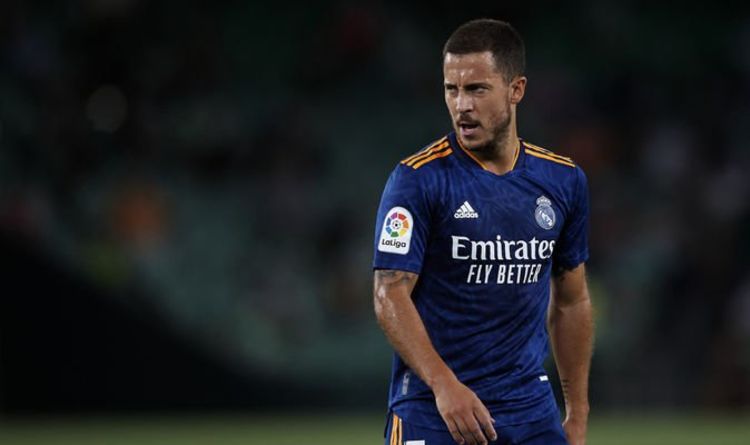 Real Madrid winger Eden Hazard could seal a sensational return to Stamford Bridge, much like Cristiano Ronaldo did to Manchester United this summer. Granted, the Belgian’s spell away from his club would be far shorter than Ronaldo’s, and his stint in Spain far less successful, but plenty of factors point towards a fast-moving saga which could lead to the return of a Chelsea all-time favourite.

Hazard sealed what he labelled a "dream" move to the Bernabeu back in 2019 after a stellar seven-year spell with the Blues.

His decision to leave will not have been easy, giving up his fan-favourite status which was earned through years of dazzling displays, quick feet and mazy runs.

Although he fulfilled a childhood ambition to switch to the Spanish capital, it has not gone to plan.

Notching just five goals in just over two years pales in comparison to the 55 he managed during his final three seasons at Chelsea.

Eden Hazard could soon be on his way out of Real Madrid (Image: GETTY)

While his downturn in form has been obvious, injuries have also wreaked havoc with his career out in Spain as knocks preventing him from getting out of first gear.

A Stamford Bridge return could reignite the form which lies within, and El Nacional claim informal talks have already been held.

Hazard would surely be receptive to a way out of his Madrid nightmare, and flashing back to his departure from Chelsea, prospects of a return are certainly positive.

“I hope you understand I had to pursue my next chapter, just as each and every one of you should when you have the chance to pursue your dreams,” said the Belgian after his Madrid move was confirmed.

Thomas Tuchel has been a revelation since taking over as Chelsea boss (Image: GETTY)

Despite his enduring class, a spot on the wing would not be guaranteed with the Champions League holders.

Exciting young bucks like Callum Hudson-Odoi, Kai Havertz and Christian Pulisic would all have to be fended off to earn a spot, which would require a dramatic improvement from the form he has shown in recent seasons.

However, it does appear that there is a deal there to be done which would create jubilation in west London.