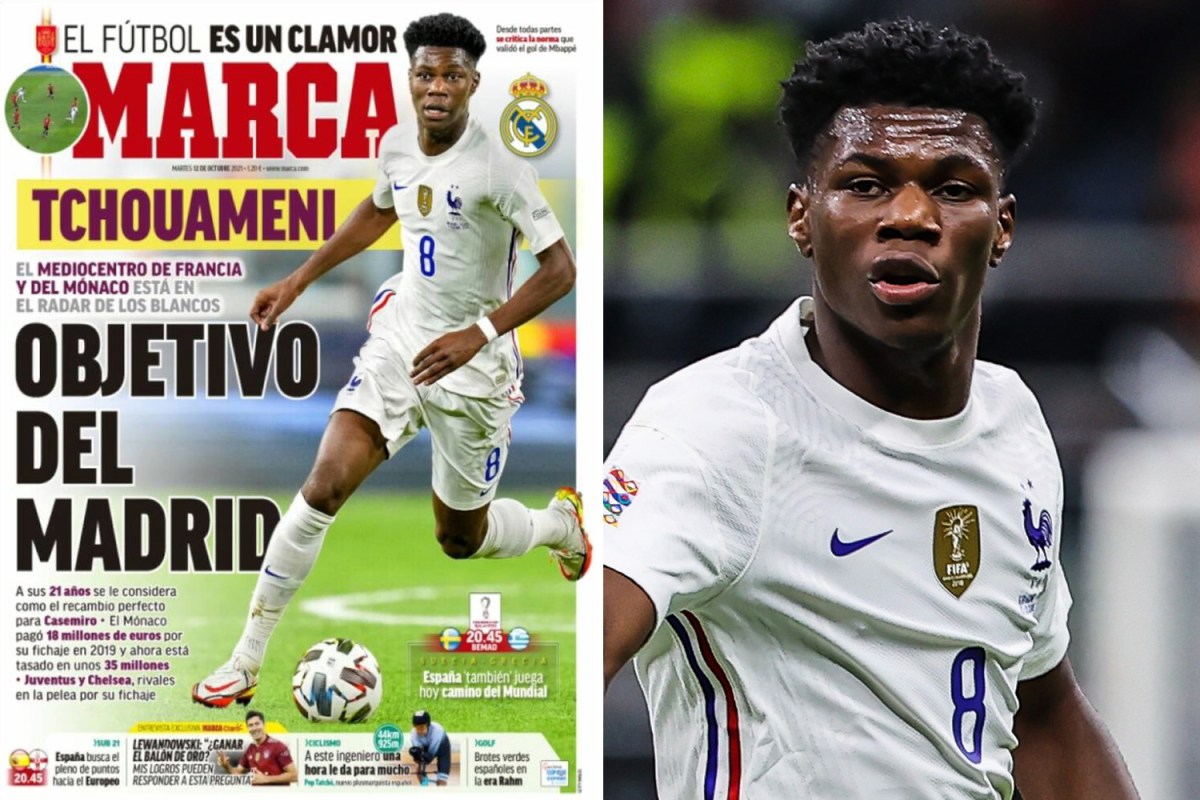 REAL MADRID are reportedly ready to go toe-to-toe with Chelsea in a battle to sign Monaco midfield star Aurelien Tchouameni.

Spanish outlet Marca claims the LaLiga leaders see the France ace as a potential successor to Casemiro with the Brazilian turning 30 in February.

Real Madrid are rumoured to be keen on a move for Aurelien TchouameniCredit: Sportphoto24/Marco Canoniero

Carlo Ancelotti’s club have already made moves to try and bring Tchouameni’s compatriot Kylian Mbappe to Spain next year, much to the annoyance of Paris Saint-Germain.

Tchouameni has enjoyed an outstanding beginning to this season, making 15 appearances for Monaco and netting in their 3-0 win against Bordeaux.

The Ligue 1 starlet has impressed on the international stage, covering the midfield slot next to Paul Pogba in N’Golo Kante’s absence.

His efforts drew praise from the Man United star who hailed the player for having ‘extraordinary technical and physical quality’ in a Ouest-France interview.

The former Bordeaux youngster helped Les Bleus triumph for the first time ever in the Nations League, making a full 90 minute appearance in the team’s 2-1 defeat of Spain in the contest’s final.

Marca claims Madrid could face a battle for Tchouameni’s signature from a few of Europe’s other big clubs alongside Chelsea.

It is thought Juventus have an interest in the player with Liverpool rumoured to be keeping an eye on the £34million-rated star.

And this year the player, who has been on target twice for his club in France’s top-flight, was referred to as a ‘complete, modern midfielder’ by club-mate Cesc Fabregas.

Reports claim Chelsea may well have taken note of Didier Deschamps opting to use Tchouameni as cover for Kante in midfield.

In the summer The Athletic claimed The Blues, who face Brentford on Saturday, felt the 21-year-old would benefit from another season in Ligue 1.

Madrid have battled with their budgets being affected by the impact of Covid-19.

Tchouameni has impressed with his performances for France and MonacoCredit: Rex

However, the club hopes to be in an improved financial situation next summer.

And the Daily Mail claims Touchameni and Mbappe remain the Bernabeu outfit's top targets for 2022 with the PSG striker potentially available on a free transfer.

Tchouameni has notched up 53 Monaco appearances in addition to the 37 he made at Bordeaux as a teenager before his January 2020 switch.