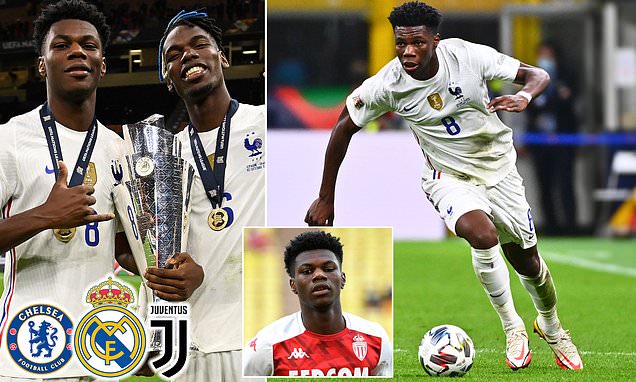 Real Madrid are looking to beat Chelsea and Juventus to the signing of Monaco midfielder Aurelien Tchouameni next year.

According to Marca, the Spanish giants have identified the 21-year-old France international as a key target for next summer's window after Kylian Mbappe as their transfer plans for 2022 already begin to take shape.

Tchouameni has enjoyed a flying start to the season and has filled in for N'Golo Kante with France, partnering Paul Pogba in midfield as his country won the Nations League for the first time at the weekend.

Tchouameni played the full 90 minutes as France fought back from a goal down against Spain to win the tournament for the first time.


Spanish publication Marca say that Madrid, who reportedly view Tchouameni in a similar mould to Casemiro, face competition from across Europe for the midfielder.

Chelsea are mooted to be interested in him and will have taken note that he is the man France turned to in order to fill the void of one of their own players in Kante.

Serie A giants Juventus have also been linked with making a move next summer.

As well as Real Madrid, the Monaco midfielder is also wanted by Chelsea and Juventus

Madrid have been significantly knocked financially by the Covid-19 pandemic but will be hopeful that by the time next summer comes around, steps will have be taken on the road to recovery.

Tchouameni's international team-mate Mbappe remains the club's No 1 priority with the striker potentially available on a free transfer but if Carlo Ancelotti and co get their way next year, there could be two new Frenchman at the Bernabeu.

Tchouameni has played 15 times for Monaco this season, scoring twice. He has five caps for France.