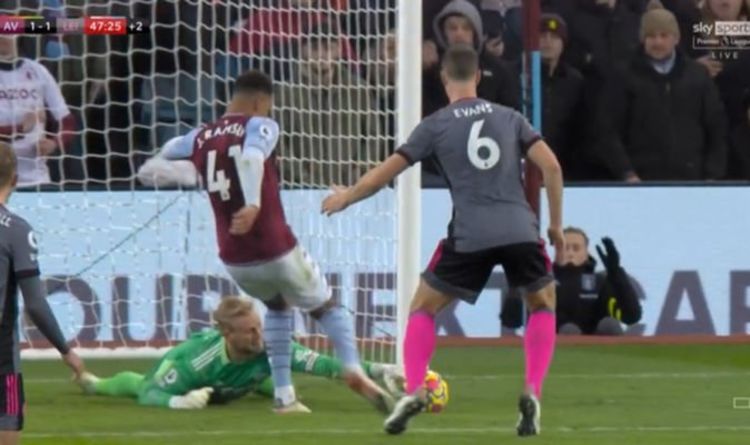 Gary Lineker offered a telling reaction after Leicester were the beneficiaries of a controversial VAR decision against Aston Villa. The Foxes, who Lineker supports, had seemingly gone behind in the Premier League clash but Jacob Ramsey's effort was ruled out after referee Michael Oliver was urged to review the footage.

Leicester went ahead at Villa Park thanks to Harvey Barnes' goal. The winger coolly collected possession on the left-hand side of the penalty area and slotted into the bottom corner of Emi Martinez's goal.

However, Villa equalised through Ezri Konsa.

That goal was also reviewed by VAR, with Leicester arguing that the defender was offside, but Oliver corrected awarded the strike.

Then came the most controversial moment of the first half.

Matty Cash headed a delivery into the box back across goal and Leicester goalkeeper Kasper Schmeichel initially spilled the ball.

However, the Dane then put one hand on top of the ball before Ramsey slammed home.

At first, Oliver allowed the goal to stand but was asked to review the footage on the VAR monitor. He needed just one look to disallow the strike.

The rule states that a goalkeeper is deemed to be in possession if they have one hand on the ball.

"I think it's a terrible rule," the former Villa midfielder raged.

"It would have been given a try in the Super League."

The comments refer to the failed attempt by 12 of Europe's biggest clubs to form a Super League.

It was a plot that was roundly condemned.