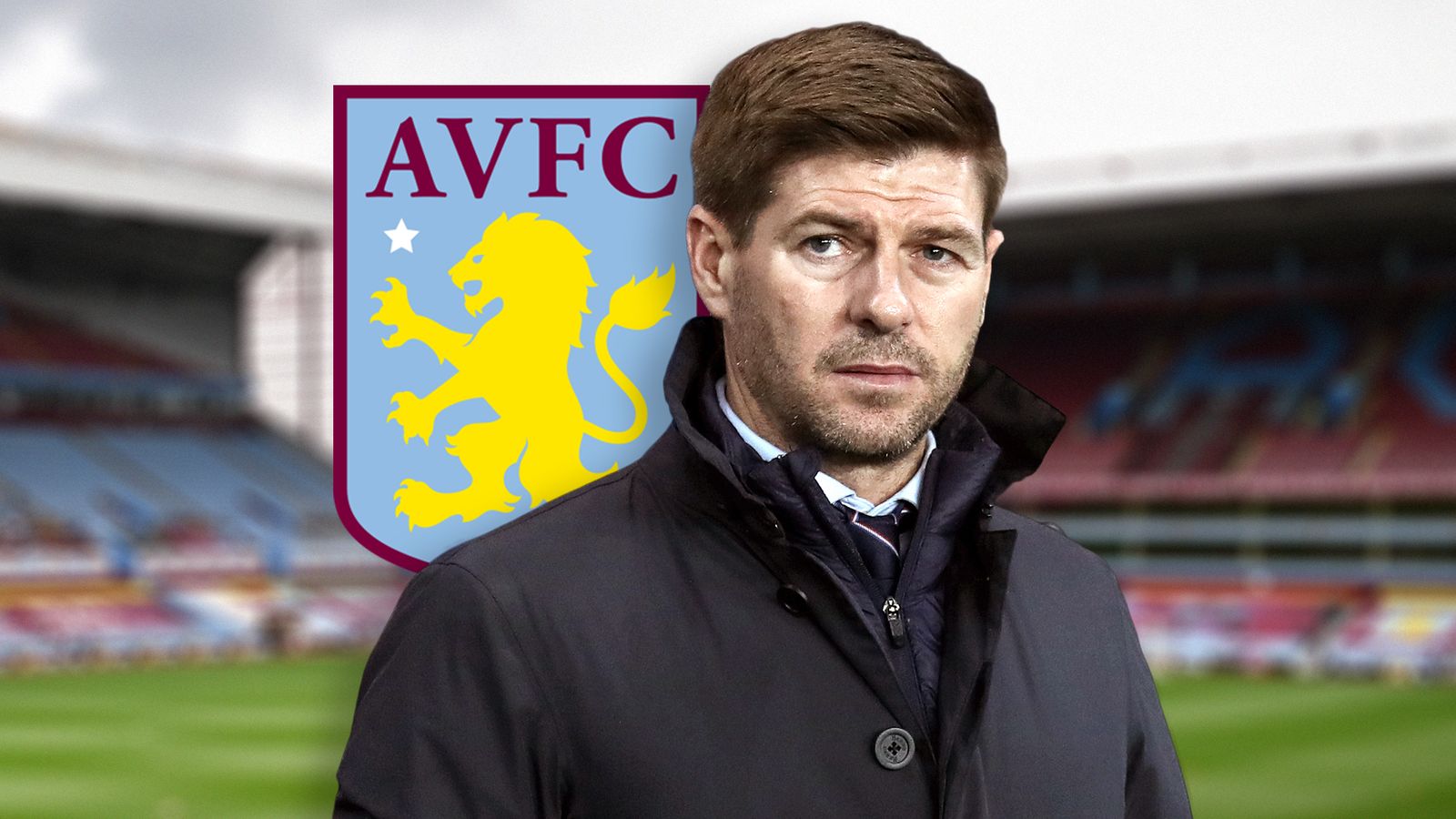 Steven Gerrard says his ambition is to take Aston Villa back on a "European journey" by emulating the success of this weekend's opponents Leicester City, whose manager Brendan Rodgers has had a profound influence on his own career.

The Midlands club are one of the five English clubs to have won the European Cup having lifted the trophy in 1982, but have not featured in any European competition since the start of the 2009/10 season.

Gerrard replaced Dean Smith as Villa manager with the side 16th in the Premier League after five straight defeats, but the club's ambitious plans remain at the forefront of his mind after three matches in charge.

Speaking exclusively to Sky Sports' Jamie Carragher ahead of Villa's home encounter with Leicester on Super Sunday, Gerrard reflects on his managerial journey so far, from coaching in Liverpool's academy to Rangers and now onto his position at Villa Park...

"I felt ready at the time when I took the Rangers job as I'd had 18 months or more behind the cameras coaching in a manner I wanted at Liverpool," Gerrard tells Sky Sports.

"When that call did come, it was more about feeling ready. With a club the size of Rangers and the challenge, it was a difficult opportunity to ignore."

Last season, Gerrard delivered Rangers' first Scottish Premiership title for a decade, in the process preventing Celtic from winning an historic 10 in a row.

But the former Liverpool captain admits he was unable to turn down the opportunity of moving back to England when the Aston Villa post was offered to him, however much his decision to leave frustrated Rangers supporters.

I've suffered enough as a player. I've had plenty of highs and lows, so I'm man enough to deal with this as I know what football's about.

"The frustration always comes from the timing," Gerrard reflects. "When you leave during a season, I totally respect and understand why people have got a bit of a gripe on that.

"When it was Aston Villa, the chance to come back to the Premier League, the size of the club and the ambition of the club, the timing wasn't something I could think about.

"It was more about grasping the opportunity. I leave with a heavy heart but I also leave with my head held high because when you sit down with a board and they set you a remit, if you don't do that then you get the sack.

If that job ever became available, they'd have a long list of world-class managers that would want to take it.

"If you have a run of games which are not acceptable, you get the sack. Fans move on very quick from that, so for me it was about for once in my life thinking what was best for me and for my family. That's the reason I made this decision."

Gerrard has spoken of his respect for Leicester manager Brendan Rodgers ahead of Sunday's midlands derby between the two clubs.

Gerrard played under Rodgers at Liverpool between 2012 and 2015, the captain and manager almost winning the Premier League together in 2014 before the Reds blew a five-point lead at the top of the table with only three matches remaining.

Aston Villa boss Steven Gerrard looks ahead to his reunion with Brendan Rodgers, and claims the pair would have won more titles together at Liverpool had the Norther Irishman taken charge sooner.

The pair crossed paths again in Scotland, this time as opposing managers, where they were in charge of the Old Firm clubs.

Rodgers won back-to-back domestic trebles during his two full seasons at Celtic, where he faced Gerrard's Rangers team on two occasions. Each recorded a 1-0 win during that 2018/19 season, Gerrard's first in management, before Rodgers left for Leicester shortly afterwards.

"I learned a lot off Brendan," Gerrard says, "probably more than my previous managers because of the age I was at.

"Under Gerard Houllier, I wasn't a top student of the game and I wasn't that interested in the tactical side of it - and I probably wasn't in the early days under Rafael Benitez either. It was towards the back end of Rafa's reign and into Brendan Rodgers' time that I started thinking about my own game intelligence.

I believe that had I worked with Brendan earlier, we'd have had more success together for sure.

"I believe that had I worked with Brendan earlier, we'd have had more success together for sure. I think he's a top coach and he's very slick in the way he delivers it. He's really good with his one-to-one stuff, how he manages dressing rooms and deals with individuals.

"If I didn't take stuff off Brendan, I'd be very stupid and naïve because he's going to manage at the top for a very long time. I experienced him as a player, I've seen it from afar and I've competed against him already as a coach up in Scotland. I've learned tons off Brendan and I'll admit I've stolen a few things off him as well.

"I'm quite lucky as I worked as a player with a lot of managers that liked to be defensive and pragmatic in their style, but also towards the back end of my career, I worked with the likes of Brendan and he was very technical.

"He wanted to build everywhere and to overload in every area of the pitch so that gave me something different to think about in terms of how I wanted my teams to play. I've tried to get a combination of both. If I can get the balance right in terms of being organised whilst having the right players who can hurt the opposition, I feel we can move forward."

Image: Gerrard says when his former manager Brendan Rodgers joined Celtic in 2016 it increased his focus on Scottish football

It is something that Gerrard relishes being a part of, but the new boss acknowledges that he can't look too far ahead in a cut-throat industry.

"It doesn't scare me if a job doesn't go well, if it gets cut short or it ends in a painful way. I've suffered enough as a player. I've had plenty of highs and lows, so I'm man enough to deal with this as I know what football's about.

"I don't think in terms of longevity as I don't have any targets beyond Aston Villa. I know a lot of people have been speaking about that in the last couple of weeks, but for me it's very much about staying in the now and trying to do the best job I can do for Aston Villa.

"I'm solely focused on trying to add to the journey I started at Rangers. That's the only thing that's on my mind; I haven't got a 10 or 15-year plan. My plan is to try to take three points off Leicester."

The recruitment has been good, so it's very much a case of looking at what can be improved on and what we can tweak. It's about taking the club onto the next level.

At his unveiling last month, Gerrard rejected any suggestion that he views the Villa post as a stepping stone to the manager's role at Liverpool, saying he would be happy to see Jurgen Klopp stay in his position for life.

Gerrard, who made 504 appearances for Liverpool, even made a point of requesting that his new employers should be the focus of conversation in his first press conference.

The 41-year-old reiterated his view that any such talk at this stage is disrespectful to his boyhood club, with Villa the fourth of his career as either a player or as a manager.

Jamie Carragher looks at how is Liverpool former team-mate, Steven Gerrard, and boss, Brendan Rodgers, will face up against each other as managers in the Old Firm derby in 2018.

"I don't really take much notice of it, if I'm honest," admits Gerrard. "I was asked the question in my first interview and my answer was pretty simple. When I take a challenge on, I'm all in. I'm committed to that job and that role.

"So it's disrespectful to them if people think that I'm just a shoo-in or a foregone conclusion. For me, I don't want to get involved in all that. The most important thing is that Villa fans know I'm 110 per cent committed to this job."

Gerrard will face Liverpool and Klopp in his fifth match in charge at Villa, but this weekend sees his side host Leicester on Super Sunday.

The former England midfielder has focused on making Villa more defensively solid, highlighting how the team's attacking pedigree has never been questioned - a point indicated by them being the Premier League's seventh-highest goalscorers this term.

Villa kept a clean sheet in Gerrard's opening game against Brighton, and faced only six shots - their fewest in any match this season. Crystal Palace then only mustered eight attempts the following weekend to give further credibility to the belief that Gerrard is already having an impact.

"Dean [Smith] did some fantastic work here so I didn't think an awful lot needed to change," Gerrard says. "When you come in and speak to existing staff who are staying around, everyone spoke well about Dean Smith.

"This hasn't been a case at all of me saying, 'it's all been done wrong'. There's been some fantastic work and he signed some top players. The recruitment has been good, so it's very much a case of looking at what can be improved on and what we can tweak.

"Taking Villa from where they were to finishing last season in the Premier League was a superb job. Obviously, I came with the side having suffered five straight defeats but based on the performances I don't think they deserved that.

"It's now about building on the work Dean did and taking the club onto the next level. I'd love nothing more than to give these fans some good memories and some good times.

"That's the challenge for all of us together and I feel the club is ready-made to achieve that. We need to crawl before we can walk and need to fix a few things first.

"I look at teams from afar before I took the job, like West Ham and like Leicester, who are now part of a European journey.

"I believe a club like Villa need to go on a European journey ourselves so we can be taken seriously. We have to be competing for the domestic clubs and I see no reason why we can't. It's a realistic aim and a target."