Southampton 2-2 Leicester: Foxes come from behind to salvage a point
Daily Mail 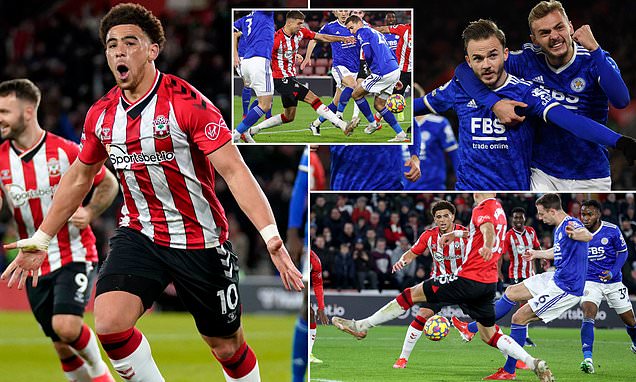 Not quite the avalanche from meetings past but a welcome flurry of goals in these barren parts.

Not quite another 9-0 obliteration but yet more angst for Ralph Hasenhuttl.

Before last night, no other top-flight ground had been so starved of goals as St Mary’s this season. Here, four were shared along with two points and a sense of what might have been.

Southampton led 2-1 when Nathan Tella found the goal at his mercy - his header was wasted, Leicester hit back almost immediately and Hasenhuttl’s mood never recovered.

Leicester’s travelling support were barely through their first reminder of routs gone by when Bednarek – one of the victims of that 9-0 humiliation in 2019 – promptly shut them up.

Jan Bednarek gave Southampton, coming off a 4-0 defeat, an early lead against Leicester

‘Who put the ball in Southampton’s net?’ visiting supporters sung. ‘Half the f****** team did.’

Shame that no fewer in blue stood and watched as Nathan Tella’s pull-back was fired at goal by Mohammed Salisu.

Kasper Schmeichel was alert, at least - the goalkeeper was down sharply to push the ball out, only for Bednarek to react quickest and stab it home.

It was reward for Saints’ early pressure and Hasenhuttl’s side continued to carry a threat either side of Evans’ equaliser. Credit Leicester, they learnt some lessons, too – their goal largely mirrored the one they had conceded. From James Maddison’s ball in, Wilfred Ndidi saw a shot saved by Alex McCarthy and Evans was there to smash it home.

That earned Rodgers’ side a share of Premier League history – only once before has a team both scored and conceded in 14 straight away games.

Their defending here suggests only one half of that bargain might dry up soon. Adams, who had squandered an early headed chance, was afforded too much space to glance home Nathan Redmond’s brilliant cross 10 minutes before half-time.

The second period was delayed by 15 minutes as paramedics treated a supporter who had to be carried out.

Saints really should have put this game to bed soon after; how they were made to pay for Tella’s miss as Maddison danced inside a challenge before firing past McCarthy at his near post.

Both sides could have won it but no one had a clearer opening than Maddison late on – if only Vardy had looked up.