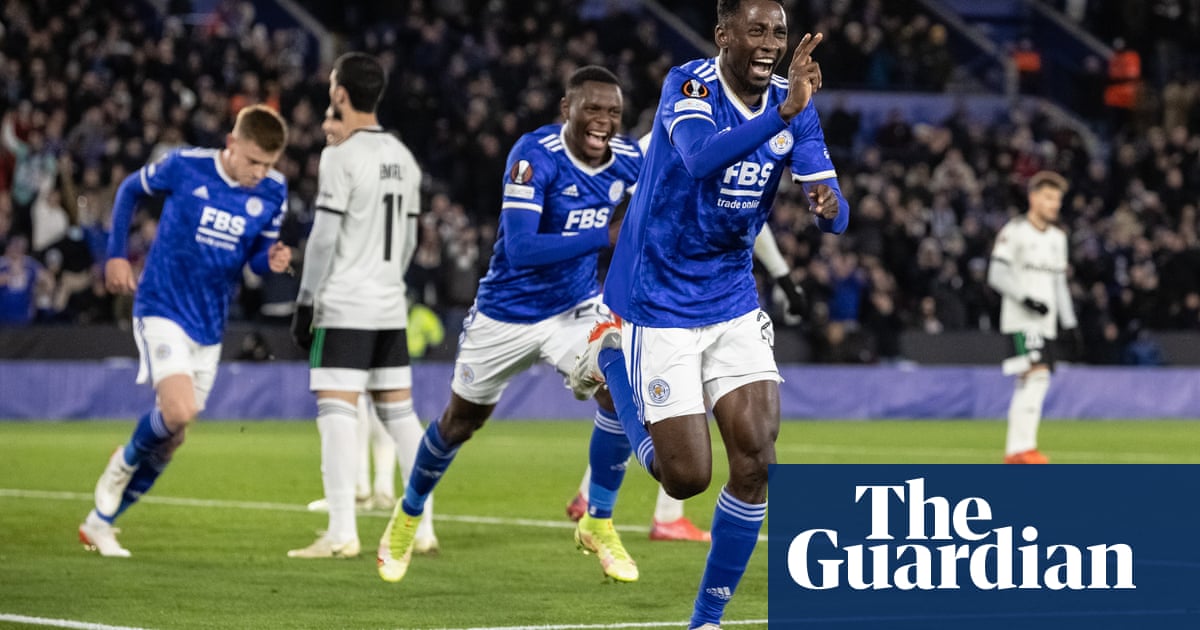 Leicester City’s season is so delicately balanced they could have been top or bottom of their Europa League group after this game but, thanks to goals from Patson Daka, Wilfred Ndidi and James Maddison, they need one point away to Napoli next month to be sure of progressing to the knockout stages.

Their victory over a Legia Warsaw side who have lost every league and European game since beating Leicester in September was marred by crowd trouble, however, as travelling fans fought with around 200 police.

Brendan Rodgers could be satisfied that his pre-match appeal to home fans to be more supportive was well met as Maddison, in particular, enabled Leicester to shake off their inconsistent form in the Premier League and find a spark.

However in a season when crowd trouble has soured England’s games with Hungary, it was depressing to watch the Polish fans appear to spoil for a fight.

Leicester’s erratic season was mirrored in a helter-skelter first half containing three goals inside the middle quarter of an hour. They attacked with vigour and penetration but had very little control over the game.

Only a few minutes before kick-off, Jonny Evans had to drop out of the named XI, with Daniel Amartey retaining his place from Saturday’s 3-0 home defeat by Chelsea, although this time he was part of a back four. The experienced Northern Ireland defender Evans had only recently returned from a foot injury, and has not been at his usual level.

Rodgers must be fed up with answering questions about speculation linking him with Manchester United but his best answer would be to provide disgruntled Leicester supporters with a run of positive results.

Fielding Maddison behind a fast-paced front three enabled Leicester to get off to a very positive start. Legia, notwithstanding their superbly vocal support underscored by a huge drum, have been in woeful form, losing seven successive Ekstraklasa games since beating Leicester at home in September, their worst run of domestic results in 85 years. Manager Czeslaw Michniewicz, who oversaw that victory over Leicester, was sacked in October.

Legia Warsaw’s travelling support lit flares and clashed with police during the second half of their side’s defeat to Leicester.
Photograph: Jason Cairnduff/Action Images/Reuters

Legia looked terrified to tackle in the early stages, even with five at the back. They allowed Maddison to weave one way then the other before the recalled playmaker shot over. It was no surprise when Leicester broke through shortly afterwards.

Daka was fortunate when the ball broke his way, after Harvey Barnes cut inside from the left flank, but Daka finished with style, shooting in low to the far corner with his left foot. Following his four-goal effort away to Spartak Moscow, Jamie Vardy’s deputy is continuing to take his opportunities.

Legia then switched to a back four but, after Maddison had another effort blocked following Barnes’s foray to the byline, Leicester’s No 10 got the goal he had been smelling.

After lending the ball to Ademola Lookman, Maddison received the short cross back to him, cut inside on to his left foot and hammered the ball high into the top corner of the net.

At this point, when Leicester should have been free to start strolling, they conceded a penalty, Ndidi raising his hand to Yuri Ribeiro’s cross.

Although Kasper Schmeichel saved Mahir Emreli’s penalty, Filip Mladenovic followed up to shoot home from close range. Just as Legia started to look comfortable, neat and tidy in possession, Ndidi atoned for his misdemeanour by heading in Maddison’s corner to make it 3-1 at half-time.

Stopping Maddison appeared to be Legia’s rather obvious half-time remit and within three minutes they had effectively succeeded.

Mateusz Wieteska earned a yellow card for leaving the England international crumpled in a heap with a challenge in the centre circle as Leicester continued to attack.

Maddison gamely limped on for another 15 minutes but the rest of the game seemed set to be played in rather a fog after the travelling fans lit all their red flares simultaneously in the 65th minute before trouble broke out between the Polish fans and police. Meanwhile, the game on the pitch had been settled in the first 45 minutes.