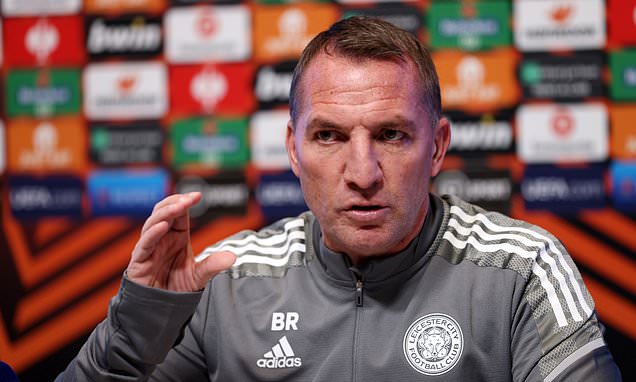 Brendan Rodgers has reiterated his commitment to Leicester despite ongoing links with the Manchester United job.

Sportsmail understands the former Liverpool boss is being considered as a candidate to succeed Ole Gunnar Solskjaer as permanent United boss in the summer.

Michael Carrick has taken over as caretaker manager, while Sportsmail understands the club's hierarchy have named a five-man shortlist to take over as interim boss until May.

But Rodgers - who already denied rumours of moving to United three days before Solskjaer was sacked - once again distanced himself from the Old Trafford links, insisting he accepts the 'gossip' will go on until a full-time manager is named.


'I don't take it as anything,' Rodgers said ahead of Thursday night's Europa League visit of Legia Warsaw.

'It's not real. There's always gossip and that will be there until they appoint a full-time manager. My commitment is to here.

'The culture here is about the development of the players, and that's where I see it, even more so in this period.

'I respect you guys have stories to do and to create a narrative, but that doesn't include me.'

Rodgers was appointed Foxes boss in February 2019, and has helped Leicester to two successive Europa League finishes as well as leading them to their first ever FA Cup success last season.

And forward Ayoze Perez has vowed Leicester's stars are not distracted by speculation linking Rodgers with a move away ahead of Thursday.

'We are not even thinking about that possibility (Rodgers leaving). What he has shown us, he is totally focused on where we can improve,' the Spaniard said.

'We are not thinking about anything else, not him either. We are really focused here.

'He is trying to make us think about the basics (to improve form). You have to try not to overthink and overdo things. We are sure the win is close. We know the importance of tomorrow and we are focused on that.'

Meanwhile at United, Sportsmail understands Paris Saint-Germain manager Mauricio Pochettino is still interested in the position but is not convinced they have made a significant approach for him yet.

The ex-Tottenham boss remains United's first-choice to succeed Solskjaer and is ready to quit immediately, but the Ligue 1 giants are determined not to let him leave before the end of the season.

That has led the club to come up with a five-man shortlist to take over from Carrick on an interim basis.

Ralf Rangnick - currently the head of sports and development at Lokomotiv Moscow - and former Barcelona boss Ernesto Valverde are two of the names they will speak to.

The duo will be joined by former Borussia Dortmund boss Lucien Favre and ex-Roma manager Paulo Fonseca, while the list of candidates is completed by Rudi Garcia, who took Lyon to the Champions League semi-finals in 2020.

Sportsmail understands United are not considering the five names on the shortlist as permanent options and believe an interim appointment will bring stability during a chaotic season, before a more long-term process gets underway in the summer.

Sportsmail also understands Steve Bruce's agent has offered his services to United while Unai Emery is another outside candidate.