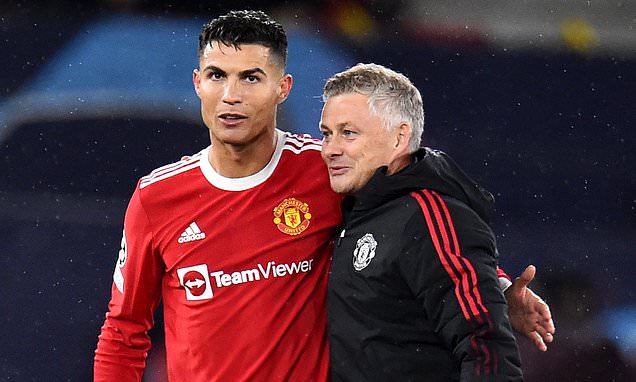 Beleaguered Manchester United manager Ole Gunnar Solskjaer has the support of his highest-profile player in Cristiano Ronaldo, with the Portuguese superstar encouraging his team-mates to get behind the Norwegian.

According to the Manchester Evening News, Ronaldo is 'holding the dressing room together' at Old Trafford as the club continues to reel from their chastening 5-0 home thrashing by arch rivals Liverpool on Sunday.

The report adds that Ronaldo is urging players 'to not down tools' and to maintain standards - despite some irked by Solskjaer's tactics and personnel choices.

The Red Devils are going through turmoil at present, having conceded nine goals in their last two Premier League matches - a 4-2 defeat at Leicester City on October 16 that was followed up by that humiliation at the hands of Liverpool.


Ronaldo knows Solskjaer well having played alongside him during his first spell at the club before being brought by the under-fire manager over the summer in a £19.7million deal from Juventus.

Despite Ronaldo's rallying cry, pressure is mounting on Solskjaer as the club fail to meet expectations under his watch.

The Times reports that a clear-the-air meeting between players and management occurred just two days after losing at Leicester - with players not holding back on their opinions.

One aspect that had irked a member of the squad was the elevation of Maguire to captain just six months after joining the club.

The England centre back was signed in an £80million deal from Leicester in August 2019 but by January 2020 he was handed the armband on a permanent basis.

In a clear-the-air meeting after Leicester, one unnamed player questioned Solskjaer's decision

The 28-year-old was picked ahead of the likes of David de Gea and Marcus Rashford, who were longer-serving members at Old Trafford and had been skipper at times during that 2019-20 season.

The Maguire captaincy situation wasn't the only issue discussed though during the meeting.

Another player criticised some of his team-mates for an apparent lack of motivation in training.

Solskjaer's tactics and favouritism were also lambasted, as another member asked him why he is so resistant to change a losing team - especially when others are performing well in training.

As reported by Sportsmail, despite the mounting pressure, Solskjaer is set for a stay of execution as manager but is still fearing for his long-term future at the club.

Solskjaer took training at Carrington on Tuesday for the first time since United's 5-0 thrashing by Liverpool, a display labelled 'embarrassing' by senior players.

The Norwegian is preparing the team for Saturday's trip to Tottenham amid a backdrop of intense scrutiny and some members of his squad questioning whether the slide can be halted under his management.

Sportsmail understands that United - who gave Solskjaer a new three-year contract over the summer - were planning to review the 48-year-old's position in December.

United had not been prepared for such a dire run of results, with Solskjaer's side losing five of their last nine games.

The board has so far resisted the calls for change, with the manager expected to remain in charge at Spurs. Sir Alex Ferguson and former chairman Martin Edwards visited Carrington on Tuesday afternoon, with United insisting the pair were attending a pre-planned commitment.

Yet Solskjaer now faces three huge games - first Tottenham, next a Champions League clash at Atalanta and then the derby against Pep Guardiola’s Manchester City - that look likely to determine his prospects.

Solskjaer is currently in the middle of a rare full week on the training ground in an attempt to arrest the slump in form.

Solskjaer's United play Tottenham, Atalanta and Manchester City in their next three games

The Glazers, based in Florida, have been watching developments with interest but senior United sources were adamant last night that no approaches for potential successors had been made after Antonio Conte, the former Chelsea boss, expressed an interest in a move.

Although formerly of Liverpool, Leicester City’s Brendan Rodgers has admirers at United - along with Ajax’s Erik ten Hag.