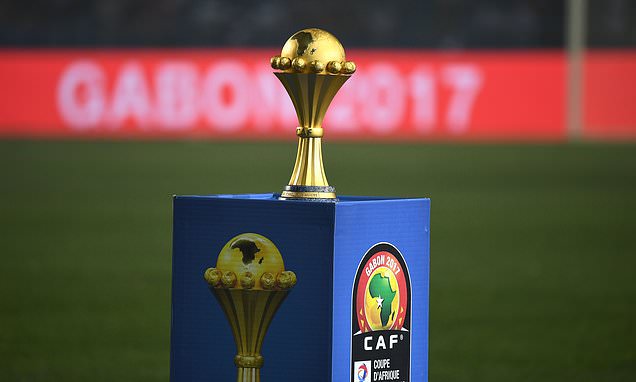 The Africa Cup of Nations (AFCON) is still set to go ahead in January 2022 despite some parts of the Cameroon tournament needing 'urgent attention' just months ahead of its kick-off.

The competition between Africa's biggest international sides starts on January 9 and will see several Premier League players leave their club in late December to take part in the tournament, including Liverpool's Mohamed Salah.

The Confederation of African Football (CAF) met on Monday to hear a report from the tournament's Organising Committee, who visited Cameroon recently to give an update on the readiness of the competition.

The African Cup of Nations set for January 2022 in Cameroon needs 'urgent attention', according to the CAF

The 'comprehensive' report stated that 'follow-ups' are needed to make sure the tournament still goes ahead smoothly.


Regarding the coronavirus situation in Africa and the of welcoming supporters into the Cameroon stadia, the Executive Committee also raised 'sanitary matters that will be part of ongoing discussions between CAF and Cameroon government.'

However, the same committee signed off the Organising Agreement between AFCON and Cameroon, which states the tournament is set to go ahead as planned.

Liverpool will be one of the Premier League teams most affected by the staging of the Africa Cup of Nations in Cameroon, with star forward Salah joining the likes of Sadio Mane and Naby Keita in taking part in the competition.

Salah, who currently tops the Premier League scoring charts with ten goals in nine games, will represent Egypt at the tournament, with Mane playing for Senegal and Keita flying the flag for Guinea.

Reports claimed earlier this month that African players taking part in the tournament will need to leave their top-flight clubs after the Boxing Day fixtures on December 26, to overcome any quarantine measures before the competition.

Players competing in the latter stages of the tournament, including the final on February 6, may not be ready for their Premier League clubs until the second week of the same month.

By that point, those players would have already missed eight matches, including six Premier League games and two FA Cup rounds, though travel plans for the English-based players are not understood to have been finalised yet.

Liverpool could lose Salah, Naby Keita and Sadio Mane (left to right) for as many as eight ties

*In the event of Egypt and Senegal going far in AFCON

It means Salah and Mane will definitely miss a potential title-influencing match away at Chelsea on January 2 should the tournament go ahead as well as two clashes against Brendan Rodgers' Leicester City.

Arsenal are another team who will see several players fly off to Africa for the tournament, with captain Pierre-Emerick Aubameyang of Gabon joining Ghana's Thomas Partey and Ivory Coast's Nicolas Pepe at the tournament.

Egypt midfielder Mohamed Elneny will be another midfield blow for Mikel Arteta's Gunners, who have Granit Xhaka out until the beginning of 2021 with a knee injury.

Arsenal's African players will definitely miss the visit of Manchester City in New Year's Day and a north London derby trip to Tottenham on January 15, while any players in the latter stages of the AFCON could miss a clash against Chelsea on February 12.

Chelsea will likely lose their Senegalese goalkeeper Edouard Mendy for the winter tournament, while Manchester City will have to cope without Algerian winger Riyad Mahrez.

Watford could lose as many as five players for the tournament including key attackers Ismaila Sarr and Emmanuel Dennis, while Leicester City are set to lose four, with Nigerian duo Kelechi Iheanacho and Wilfried N'Didi set to be involved.

Manchester United are only set to lose Ivorian duo Eric Bailly and Amad Diallo for the tournament, while Tottenham do not have any African players who could be called up for the competition.

The tournament was meant to take place in June and July of this year, but was delayed to the start of 2022 due to 'unfavourable climatic conditions' in the summer months, according to CAF.