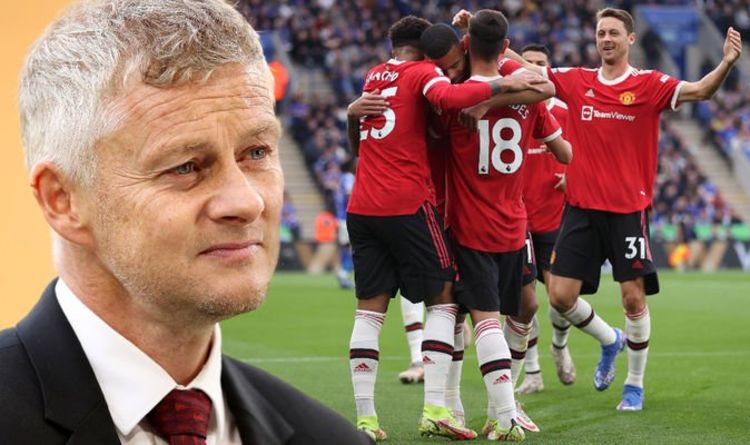 Manchester United boss Ole Gunnar Solskjaer has sensationally conceded that the Red Devils’ Premier League title chances could soon be over if they continue to lose ground on their rivals. United are embarking on a tough run of fixtures and face in-form Liverpool on Sunday, and Solskjaer says his players are not happy with their start to the season so far.

The Red Devils suffered their second domestic defeat of the campaign last week. They led Leicester 2-1 with eight minutes remaining but capitulated and lost 4-2.

The Norwegian is under pressure to turn around results, with it hoped a sensational comeback against Atalanta in the Champions League in midweek will provide a confidence boost.

United trailed 2-0 against their Champions League opponents but completed a remarkable turnaround of their own to come out on top.

However, the 20-time top-flight champions have some ground to make up if they are to achieve their aim of winning the league this season. A big-spending summer transfer window was completed with an eye on a first league success since 2013.

The club’s form has already left several players frustrated, with Paul Pogba incredibly insisting that change was required after the defeat at the King Power Stadium. Solskjaer has told his squad to step up.

“We’ve lost some points recently that we’re not happy with,” Solskjaer told journalists.

“But we are in the situation we’re in and we have to take it from here and really, really get going.

“There’s no time to lose. Because even though it’s a long season the teams we are competing against are not going to give you too many options to catch them.”

Defender Harry Maguire was at fault for at least two goals against former club Leicester. Other players have been equally susceptible to sloppy errors in recent matches.

“Sir Alex [Ferguson]’s team talks, he always [mentioned] concentration, in every team talk he said we had to concentrate and play with good concentration.

“You’d think, ‘Yeah, of course we concentrate’, but it’s 90+ minutes in every game every three days, you have to, and that’s just the standard that football has come to now.

“We have conceded goals that we could have avoided definitely, and we’re working to improve, working to get better, and the boys agree on what we need to do and they’re giving their best.

“We know that we were too open against Leicester, that’s for sure, we were too easy to cut through.”

Solskjaer added: “The funny thing is sometimes this season we’ve had more players behind the ball than what we did last season but we’ve been easier to play through.

“If you’re going to be successful in any game, doesn’t matter if it’s Premier League or Champions League, you can’t concede too many chances because eventually they’ll score.

“It’s about being on the front foot, being aggressive, winning your tackles - I think we showed a lot of that character and belief on Wednesday night.”