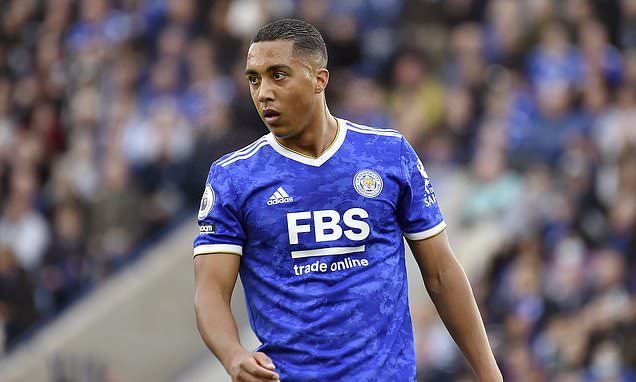 Liverpool and Manchester United have been linked with the Belgium international while Real Madrid and Barcelona have also been rumoured to be interested.

Leicester have offered Tielemans a lucrative new deal that would make him one of the club's highest earners as Rodgers sees the 24-year-old as an integral part of his side's ambitions of challenging for Europe.

Tielemans has less than two years left on his current deal that expires in June 2023 and reports last week claimed he had chosen not to put pen to paper on the new offer.


'There's reports, but there's (been) no turning down,' said Rodgers. 'I think there's just dialogue between the club and Youri's people. I think the club are waiting to hear back. But that's something that's out of my control. What I can control is his mentality, his commitment to the team, and you cannot question that.'

Tielemans has been one of Leicester's standout players since his club-record £40million arrival from Monaco in 2019, following a season-long loan, and his goal that sealed the Foxes' first FA Cup triumph last season will forever be remembered in their history.

Tielemans (R) has starred at the club, but Rodgers says they are waiting to hear back from him

Despite the questions over his future, he has started Leicester's last 64 Premier League games, the longest run of any outfielder in the division, and will extend that today against Brentford.

'My role is to improve him as a player, to ensure he's focused and his commitment is on his performance and the team. I don't think you can argue against that. He's not lost any focus whatsoever. He's a really gifted young player. I love working with him.

'I understand the nature of the game. If his commitment and focus changes, then it becomes an issue. But I don't see that with Youri at all. He's just so professional. He's a really respectful young guy.

'His representatives have a job in terms of trying to do the best they can for him. I try to concentrate on the football side and give him my best.'

Tielemans revealed last month that he was keeping his options open on whether he would commit his future to Leicester.

'I'm open to everything. The transfer market has just closed, but I want to keep as many options as I can open,' he told Sky Sports in September.

Meanwhile, Brentford boss Thomas Frank has admitted that Leicester's fairytale title win in 2016 has inspired him to dream of what could be achieved with his newly-promoted side.

The Bees have enjoyed a fine start to the campaign, beating Arsenal on the opening day, taking points off Liverpool and bombarding Chelsea's goal in valiant defeat last weekend.

'We need those stories in sport that the underdog can beat everyone,' said Frank. 'It gives everyone hope.

'I clearly remember that everyone was cheering for Leicester because we all wanted them to beat the establishment. And you wanted them badly to win.

'I almost get goosebumps now because I think it's incredible what they do. Those players are still heroes to this day in Leicester.

'Of course I dream about the big things and I hope to achieve big things and the players do the same - and not only in this season and also the future. But we need to dream and believe as if we don't do that we will never achieve anything.'