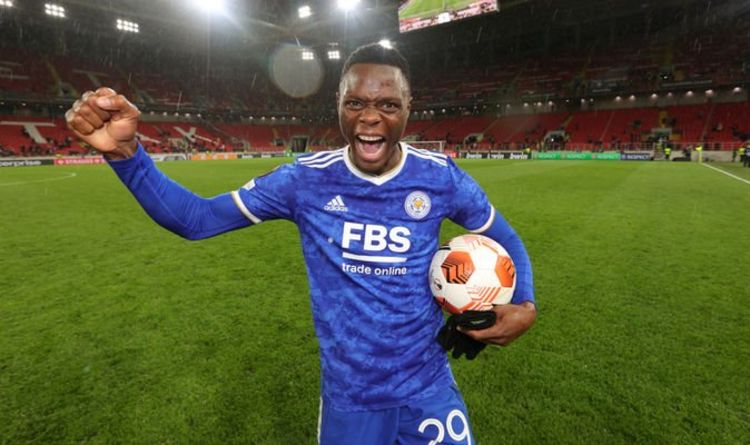 Patson Daka scored all four goals on Wednesday as Leicester won 4-3 in an enthralling encounter at Spartak Moscow. And having moved to the Foxes after heavy interest from Liverpool and Chelsea over the summer, the heavy hitters will be rueing their decision not to sign him.

Daka ran riot in the Russian capital as Leicester picked up their first win in three in the Europa League group stages following a draw against Napoli and a loss to Legia Warsaw.

But it could have been very different had he moved to Liverpool or Chelsea and played second fiddle to Romelu Lukaku or Roberto Firmino.

The striker is currently behind Jamie Vardy and Kelechi Iheanacho in the pecking order following his £22million move from RB Salzburg in the summer, but has given his chances of a regular first-team a huge boost with his four goals on Wednesday.

Liverpool have a history of signing former Salzburg players in the past with Takumi Minamino signing directly, alongside Sadio Mane and Naby Keita, who played there in the past.

But after his goal against Manchester United at the weekend in Leicester's 4-2 win, Daka displayed his delight at his development.

Speaking to Leicestershire Live, Daka was exemplary about the environment he is developing in.

“It was amazing, it was like a dream come true for me," Daka said after his goal against United.

Jamie Vardy is likely to hand the baton to Daka in terms of being Leicester's talisman (Image: GETTY)

With Vardy getting older, he is likely to be the Leicester legend's replacement as the Foxes look to prepare for the future.

And alongside Iheanacho - who registered two assists for the Zambian - they could register a lethal partnership.

Leicester play Brentford on Sunday in a bid to follow up on their two successive wins and enter the top-half of the Premier League.