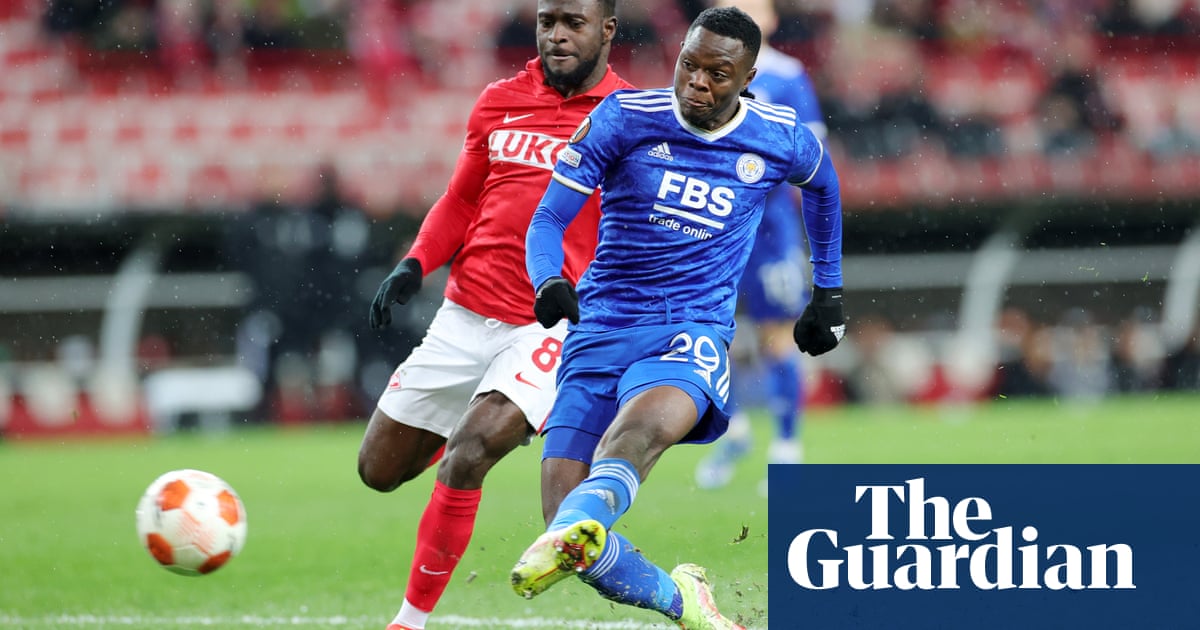 Patson Daka did more than relaunch Leicester’s Europa League ambitions. With four expert finishes in Moscow, the Zambia international announced himself as a striker who could thrill Leicester for years. If he gave a hint of his talent when scoring his first Premier League goal against Manchester United on Saturday, then on Wednesday, with Jamie Vardy watching from the bench, the 23-year-old signed for £23m last summer blazed a trail towards a bright Leicester future.

Until Daka struck a hat-trick in nine minutes at the Otkritie Bank Arena, Leicester’s Europa League ambitions lay in smithereens. Trailing 2-0, they looked to be on course for a result that would have left them with a solitary point from three matches. They had not played terribly this time but outbreaks of sloppiness cost them heavily; Daka rescued them with a demonstration of precision that will live long in the memory. Aleksandr Sobolev struck late to ensure Leicester could not coast to full time, but Brendan Rodgers’s side held on for a win that restores their hopes of finishing top of a difficult Group C.

Daka’s inclusion from the start was one of two changes made by his manager to the lineup that started against United, the other being Luke Thomas for Timothy Castagne. Leicester began with the same zest and purpose that caused United to wilt. Kelechi Iheanacho could have opened the scoring in the first minute if he had reacted quicker to a flick-on by Daka, whose clever movement was already making him a nuisance to the home defence. But the Zambian’s finishing was initially shoddy, as he slashed wide from the edge of the area in the 10th minute following neat service by James Maddison.

Spartak soon showed that they, too, could be elusive movers. Zelimkhan Bakaev proved especially meddlesome, continually finding space between the lines to knit together the home side’s swift counterattacks. When Spartak took the lead in the 11th minute, there was no surprise that Bakaev was heavily involved but the way the ball reached the net had a hint of the bizarre. Leicester seemed to be relatively safe when a blocked shot by the 25-year-old rebounded to Sobolev at the left-hand corner of the box. The forward attempt to dig out a cross but the ball deflected off Boubakary Soumaré and bounced rather slowly past Kasper Schmeichel, whose reaction was uncharacteristically slow.

Leicester’s immediate reaction to falling behind was impressive, Maddison threatening an instant equaliser with a stinging shot from long range. Jonny Evans failed to find the target from six yards after a cross by Ricardo Pereira, and in the 15th minute Maddison curled a shot over after the home goalkeeper Aleksandr Maksimenko batted an effort by Youri Tielemans out to him. Then the visitors’ menace faded, as the energetic, well-organised hosts learned to neutralise them.

The visitors lurched towards ruin when Spartak exploited slack defending in the 44th minute. A slipshod pass by Thomas and diligent pressing by Victor Moses forced Caglar Soyuncu into an error on the left side of defence, then Daniel Amartey fell over when attempting to cut out Moses’s cross, which Jordan Larsson turned first-time into the net from eight yards.

Spartak’s last meeting with a Premier League team had ended in a record defeat – 7-0 to Liverpool in 2017 – but now the home crowd began to believe in a famous triumph. Daka, however, was about to spring into goalscoring action. He cut Leicester’s deficit just over a minute later, running off the back of the centre-backs again to collect a deflected through-ball from Iheanacho and fire a low shot into the net.

Half-time brought only momentary respite for the hosts. Daka drew the sides level within three minutes of the resumption. This time Iheanacho peeled wide of the right-sided centre-back to receive a pass by Maddison, then dodge the goalkeeper and lay the ball across the six-yard box, where Daka again showed his sharpness, beating Georgi Dzhikiya to the ball to nudge it into the net.

Daka completed his hat-trick with another shrewd run and emphatic finish, racing on to Tielemans’s delivery before lashing a crisp low shot beyond the goalkeeper. He was equally nerveless in the 78th minute, when he raced on to a pass by Maddison and fired beyond the keeper again.