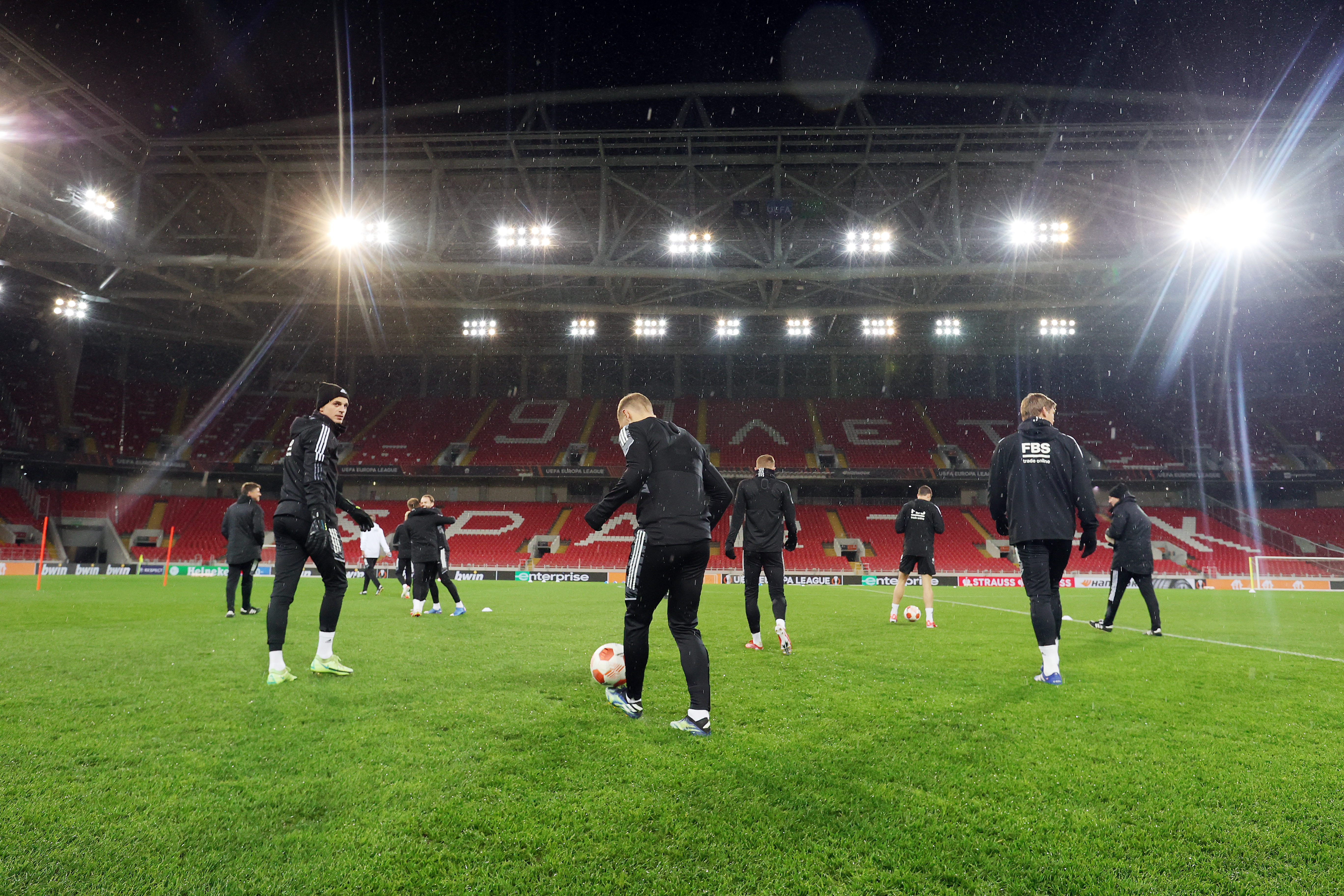 Darkness had already fallen on Russia's capital city by the time the Club's first team squad arrived at Otkrytie Bank Arena and a sprinkling of snow was forecast for later in the evening as temperatures plummeted towards zero. It was an atmospheric setting for Leicester's first day in the country.

The Foxes are still riding the wave of optimism created by last Saturday's 4-2 success over Manchester United, while Spartak rescued a 2-2 draw with city rivals FC Dynamo Moscow with two goals in the final three minutes of a pulsating home clash with the Loudspeakers.

Rui Vitória's Spartak side are currently seventh in the Russian Premier League, six points adrift of leaders Zenit Saint Petersburg. However, they were able to get the ball rolling last time out on the European stage, stunning Napoli in Italy. That places them second in Group C, two points better off than Leicester.

For Brendan Rodgers, picking up where his side left off against the Red Devils in the Premier League is a priority, after witnessing the Foxes deliver a performance which epitomised them at their very best – defensively solid for the most part and expressive in attacking positions of the field.

"We want to go as far as we can and this is a big game for us," he said. "We should have won against Napoli and the second game (vs. Legia Warsaw away) we lost, so that makes this a very important game.

"If we want to go far in the competition, this is a game that is going to be really important, especially with two games to go at home."

On Spartak themselves, the 48-year-old revealed that the research done back in England has given him and his team every indication about the scale of the challenge on their hands on Wednesday.

"They're a very good side," the Northern Irishman added. "When you go to Napoli and you win, even though they have 10 men, they showed they have a lot of quality. I know Victor Moses very well. He's a fantastic player and he's playing for a very good team and a very good club. We anticipate a very tough game.

"We've watched their games and seen their qualities. You will have a few players injured, but the structure is very good. They have an excellent coach here with really good experience. He worked at a really high level and he understands how to put together a structure in teams.

"I'm really impressed with Spartak and how they play the game. Victor plays within that, but he's one of a number of very good players."

Ricardo Pereira was also on media duties in Moscow and the Portugal international provided an insight into his take on Russia's most successful ever club, who are managed by Rui Vitória, his coach at Vitória Guimarães between 2011 and 2013.

"I know they have a Portuguese coach, he was my first coach when I started," City's No.21 told the Russian media. "I know they haven't started as well as they want in the Russian championship, but they have good players. They were in the play-offs for the Champions League against Benfica.

"They are in front of us and we want to get our first win in the group stage so that is what we'll try to do."

The 28-year-old also reflected on Saturday's result against Manchester United and highlighted the importance of continuing that momentum in European action on Wednesday evening.

"The team are very happy with the result and the performance," he added. "We wanted to get back to what we did in the past and show our quality. We needed it and we'll look to continue the momentum, play a good game and get the three points.