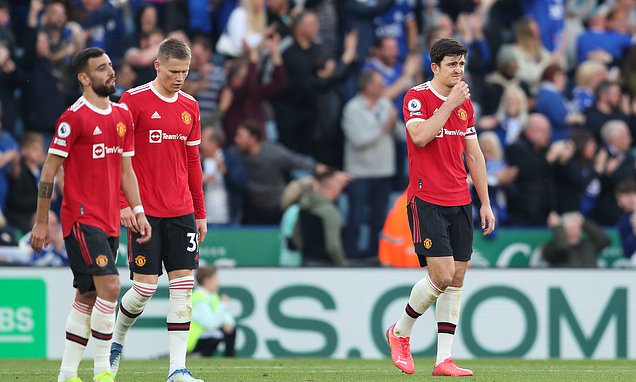 Alan Shearer and Micah Richards both hit out at Manchester United's lack of identity and game plan following their crushing 4-2 defeat at Leicester City on Saturday.

The Red Devils threw away a first-half lead to go down to Brendan Rodgers' Foxes, conceding three second-half goals including one just seconds after Marcus Rashford equalised for 2-2 at the King Power Stadium.

The result means Ole Gunnar Solskjaer's United are winless in three Premier League games and could drop to seventh place by the end of the weekend, with Sportsmail columnist Richards slamming United for not making the most of their all-star squad.

'They don't really have an identity,' Richards told Match of the Day. 'With Man United of the past, you know they had wingers, getting strikers into the box, midfielders running into the box also.


'But now, it looks like they're trying to keep everybody happy (in terms of) players. Individually, you've seen what they've got - (Cristiano) Ronaldo, (Paul) Pogba, (Bruno) Fernandes, these players should be shining.

'(Jadon) Sancho has come in, Rashford has come in and scored a goal (on Saturday), (Anthony) Martial scored a goal a couple of weeks ago. It's an array of talent, but they don't know what they are doing with the talent.

'Now, Ole has to make some harsh decisions. Whether he leaves some of his big guns out, puts one on the bench or just goes back to basics and finds the plan for how to get this team playing together.'

Solskjaer's United took the lead when Mason Greenwood lashed in a brilliant long-range drive off the post, but Youri Tielemans struck before half-time with an equally-impressive sweeping effort.

Leicester turned the tables on the Red Devils after the break through Caglar Soyuncu's goal but Rashford marked his return from shoulder surgery with an equaliser for 2-2.

But United's restoration of parity lasted just a matter of seconds as Jamie Vardy lashed home from inside the box before Patson Daka tapped home a result-clinching fourth for the Foxes.

Former England striker Shearer criticised United's failure to bring in a central midfielder during the summer transfer window, despite bringing in attackers such as Sancho and Ronaldo for a combined total of nearly £100m earlier this year.

'That was Man United's problem last season, they didn't invest in that position,' Shearer added. 'It's the same again (this season).

'There's no-one in there to really press and take control from the front. You can't do that in the Premier League.

'They will always score, Man United, because of the brilliance they have going forward. But you cannot press if you haven't got that aggression.

'If you don't know what to do, then you've got to sit back and be compact as a team. The team that I saw (on Saturday) didn't know whether to go or whether to sit. When they did go, it was half-hearted and not as a team.'