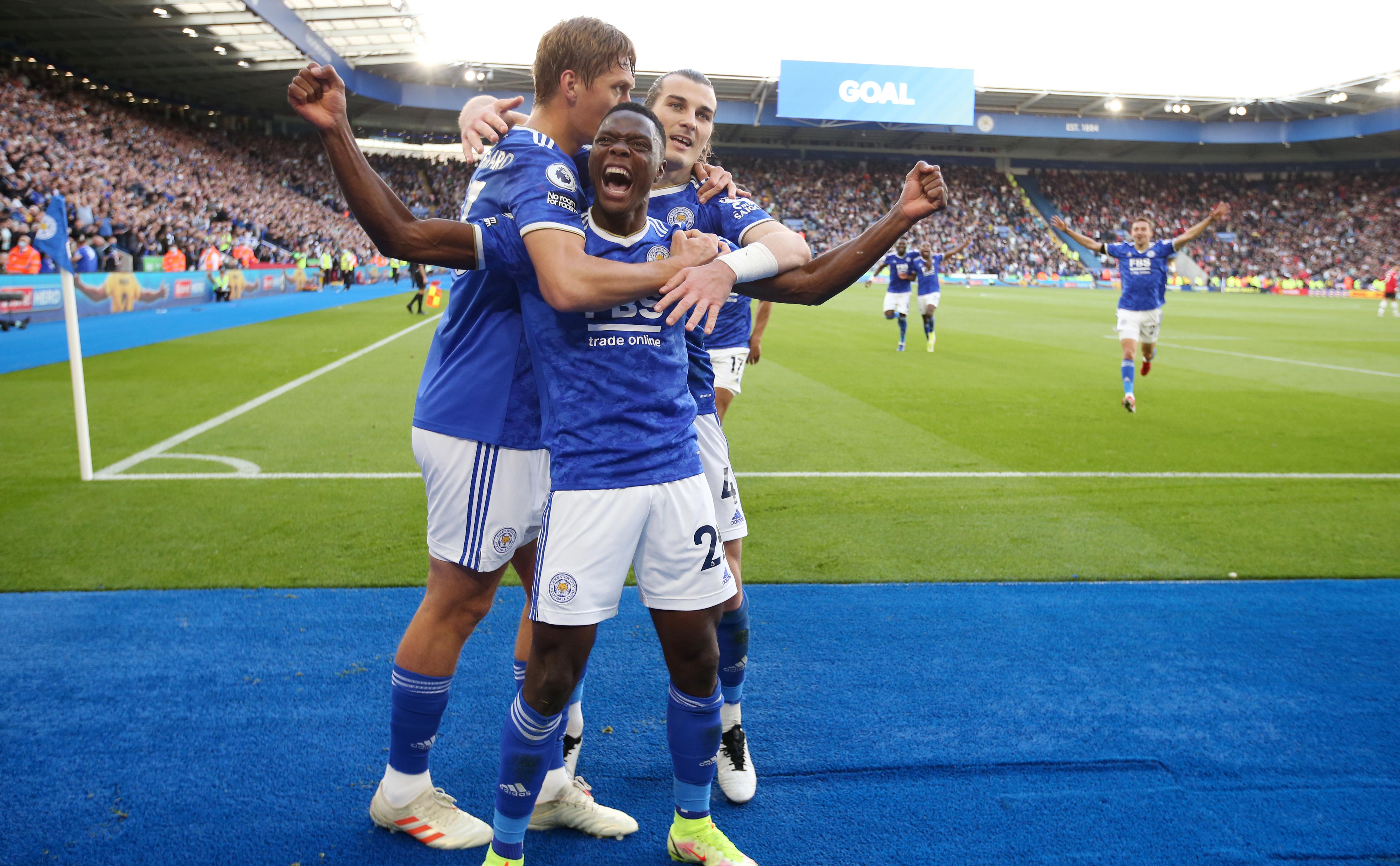 Ricardo Pereira, Daniel Amartey, Jonny Evans, Boubakary Soumaré and James Maddison came into the side as Brendan Rodgers made five changes to the starting XI that drew 2-2 with Crystal Palace two weeks ago.

Iheanacho and Maddison soon combined again before Tielemans’ floated ball to Jamie Vardy was headed back across goal by City’s No.9 – but this time it was Maguire’s centre half partner Victor Lindelöf who cleared the danger.

Maddison then forced David De Gea into the game's first save, cutting onto his right and unleashing a shot from a tight angle which the Spaniard was able to comfortably hold on to.

However, in the 19th minute, Greenwood went one better and found the back of the net with a thunderous left-footed strike that flew into the far top corner, giving Schmeichel no chance.

Leicester kept the pressure on, though, as Timothy Castagne broke away down the left with his cross eventually falling to Iheanacho, whose shot-on-the-turn was blocked, before De Gea kept out Vardy's latest effort.

Further opportunities followed. Maddison's inch-perfect cross to the far post was met by Ricardo and his cross flashed narrowly past the outstretched Vardy.

At the other end, Cristiano Ronaldo's attempt was beaten away by Schmeichel before Paul Pogba's long-range strike was deflected away from immediate danger.

A strike as equally stunning as Greenwood’s had the Foxes level. Tielemans collected Iheanacho’s pass and managed to curl the ball over De Gea and into the top corner to net his second goal of the season.

Belgium midfielder Tielemans was involved again shortly after, picking out Iheanacho, who found space for a shot but his low, left-footed strike fell just wide of De Gea's post.

The lively Greenwood created the first two efforts of a fast-paced opening to the second period, but both flew well over the crossbar after he twice cut onto his favoured left boot on the edge of Leicester’s penalty box.

Chances fell at both ends when Maddison’s free-kick was blocked by the wall and United soon had the ball up the other end with Nemanja Matić trying his luck from range and seeing his strike inches away from troubling Schmeichel.

Tielemans' left-footed strike then sliced wide of the far post and while it was always curling away from goal, it showed the attacking intent from the Foxes in the second 45 minutes.

The intense nature of the game continued and after a scramble in the Leicester box, Schmeichel produced a brilliant diving stop to keep out Greenwood from close range, though the offside flag was soon raised.

Another two chances from Tielemans went close – one clipping the post and the other rising over the bar – either side of Schmeichel keeping Ronaldo at bay.

A crazy final 12 minutes then began when Patson Daka, on a substitute, saw a shot parried by De Gea, before the ball pinballed off another Leicester substitute, Ayoze Pérez, and into Çağlar Söyüncü's path - he made no mistake, tapping the ball home.

The lead lasted all of four minutes as the Foxes were made to pay for not finishing an early opportunity that fell for Ricardo. Marcus Rashford beat the offside trap shortly after coming off the bench for United, smashing the ball past City’s ‘keeper after being found by Lindelof's long ball forward.

United were on level terms for a single minute as Vardy slammed home Pérez's neat flick emphatically, taking it on first time when others may have looked to take a touch in the penalty box.

At 3-2, Leicester were not done yet. Having been involved in the second goal, Daka put his name on the scoresheet, bundling the ball home at the back post from Tielemans' in-swinging free-kick. It was the perfect moment to score his first Leicester City goal in front of the Blue Army and seal the three points.

Jamie Vardy’s goal ultimately proved to be the final turning point of the game and was brilliantly taken. Not many players would have the confidence or ability to take the shot on first time, but City’s No.9 managed to execute it perfectly.

He takes his Premier League tally to seven for the season.

Speaking on LCFC Radio, former Foxes defender Gerry Taggart singled out Boubakary Soumaré for praise: “He’s a player who we haven’t really seen a lot of this season and when we have it’s only been in bits and pieces. But I thought he really became of age today in that midfield area and that was Tielemans’ midfield partner, Boubakary Soumaré.”

The Foxes climb to 11th in the Premier League table following matchday eight, with 11 points collected so far in 2021/22.

Leicester now turn their attention to the UEFA Europa League and travel to face Spartak Moscow at Otkrytie Arena in their third group game on Wednesday 20 October (3:30pm BST kick-off).