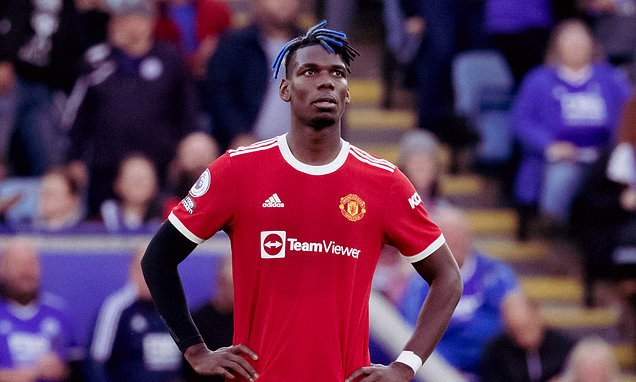 Paul Pogba has voiced his frustration with Manchester United's 4-2 defeat against Leicester, claiming his side 'deserved to lose' and insisted they need to be more 'mature' in an attempt to fix their problems.

United were expected to mount a challenge for the Premier League title this season after a lavish summer of spending but instead already find themselves by the wayside after the chastening setback at the King Power.

Delivering a sombre post-match interview, midfielder Pogba - who also endured a nightmare afternoon - believes that the streak of poor performances is damaging United, and now wants to see a quick response.

'To be honest, we've been having those kind of games for a long time,' Pogba said.


'We haven't found the problem. To concede goals, easy goals, stupid goals... the fans are going to push and put pressure on us.

'We need to be more mature I think. We need to play with more experience and arrogance, in a good way.

'We have to take the ball and play our football. Now we have to find what the key to this change is. I think we deserved to lose today.'

Questioned further on his comments on United's trend of not making the most of their riches on the pitch, Pogba explained that they lack the 'mentality' needed to sustain a push for Manchester City's crown.

Jamie Vardy netted for the hosts, who had fought back from behind in an electric atmosphere

'It's all of us. We need to find something,' Pogba added. 'We need to change something. We really don't know. It's frustrating because it's something we don't understand, but we have to find out very fast to compete.

'We will have time to think about it, and we have to stick together and find the problem.'

United were dogged by tumultuous results before the international break, having been knocked out of the Carabao Cup and slipped to defeat at Young Boys in the Champions League, and their misfortunes continued in their first game back.

Pogba is keen to see a quick response from United, and believes they must be more 'mature'

Mason Greenwood opened the scoring in the clash after thumping home a superb effort into the top corner from the edge of the box, but Youri Tielemans equalised in equally sublime style, dinking into the corner after Harry Maguire's error.

From there, pandemonium was sparked at both ends of the pitch. Caglar Soyuncu handed the hosts the lead, only for Marcus Rashford to hit back soon after being thrown into fray, beating the offside trap to slot home with ease.

Jamie Vardy then netted Leicester's third goal just a matter of seconds later before Patson Daka put the result to rest, turning home from a set-piece inside stoppage time to further pile the pressure on United manager Ole Gunnar Solskjaer.

Next, United take on Atalanta in the Champions League in midweek, before then hosting high-flying Liverpool next weekend at Old Trafford.