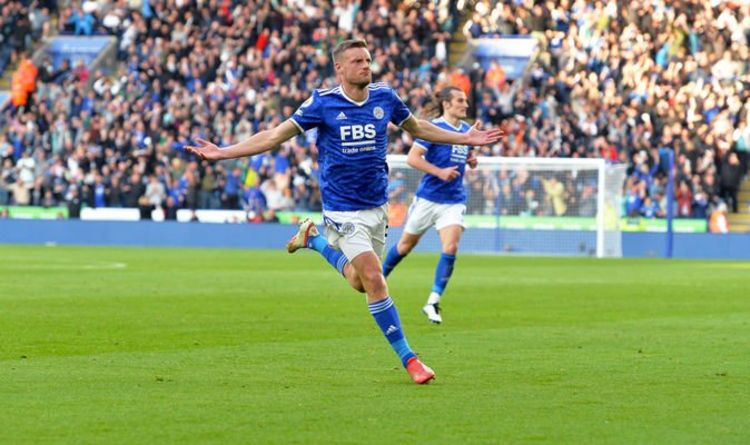 Jamie Vardy was once again on the scoresheet as Leciester thumped Manchester United 4-2 at the King Power Stadium. The tie took many twists and turns until the Foxes turned the screw to hit twice late on.

Mason Greenwood had fired the visitors ahead with a stunning effort cutting in off the right inside 19 minutes.

Youri Tielemans equalised with a brilliant dinked shot of his own just after the half-hour mark, finding the top corner from the edge of the box.

Caglar Soyuncu pounced on a loose ball two yards out to put Leicester ahead with 12 minutes of the match remaining.

Substitute Marcus Rashford thought he had stoled a share of the points when he latched onto a long ball from Victor Lindelof before smashing the ball home.

However, United's lead lasted less than a minute as Jamie Vardy's half-volley send the home fans into jubilation.

Patson Daka then wrapped up the win with an injury-time strike after finding himself unmarked at the back-post following a free-kick.

And Vardy explained that his team played a three-man midfield to make sure they grabbed control of the match.

"It was massively important," Vardy said. "The most important thing was the performance because we had let our standards slip but we had the international break to reflect on things.

"We let him [Mason Greenwood] come inside way to easy onto his favoured foot and he put it right into the top corner. There were no complaints but I think you saw the reaction of the lads.

Leicester moved to within three points of Man Utd in the Premier League table (Image: GETTY)

"We might have to change, do we need more legs in there? What do we need?"

"I pick the team, Harry Maguire showed no reaction and I hold my hand up if that does not work out. If we concede four, I probably made a bad decision."