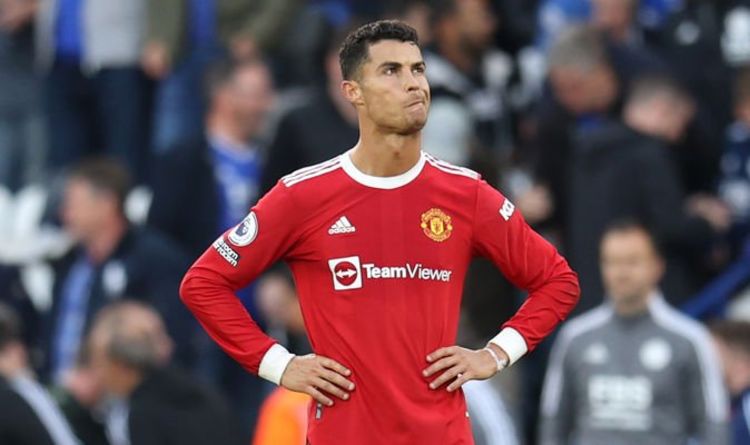 Manchester United star Cristiano Ronaldo attempted to storm down the tunnel for the second Premier League game running after the Red Devils were taken apart by Leicester City in the closing stages at the King Power Stadium. The Portuguese failed to get on the scoresheet as the Foxes ran out 4-2 winners, and Ole Gunnar Solskjaer had to urge his star player to acknowledge the away end after a tough afternoon.

Ronaldo was similarly unhappy when United drew 1-1 with Everton before the international break.

On that occasion, Andros Townsend consoled the 36-year-old after he celebrated his equaliser using Ronaldo's trademark celebration.

This time out, it was a frantic final 15 minutes which decided the encounter in Leicester's favour after goals from Mason Greenwood and Marcus Rashford had kept Solskjaer's side in the contest.

Late strikes from Jamie Vardy and Patson Daka secured a memorable result at the King Power Stadium, which was enough to push Ronaldo over the edge.

It took an intervention from Solskjaer to put things right as the Norwegian pointed towards the away end, at which point Ronaldo obliged.

It still was not a great show of sportsmanship from the fan favourite who United supporters have flocked to see since the start of the campaign.

His frustration is clear to see, however, as his individual goal-scoring exploits are not translating to points on the board.

Ronaldo will have to be on top form to overcome daunting contests against Liverpool and Manchester City on the horizon.

Even if those games do not go to plan, fans should at the very least demand to be acknowledged.

It is a make or break few weeks for Solskjaer, with United surely needing a statement result against high-calibre opposition to shrug off speculation around his future.

There is plenty to unpack from an eventful afternoon in the Midlands, which will need to be put right in the coming weeks.