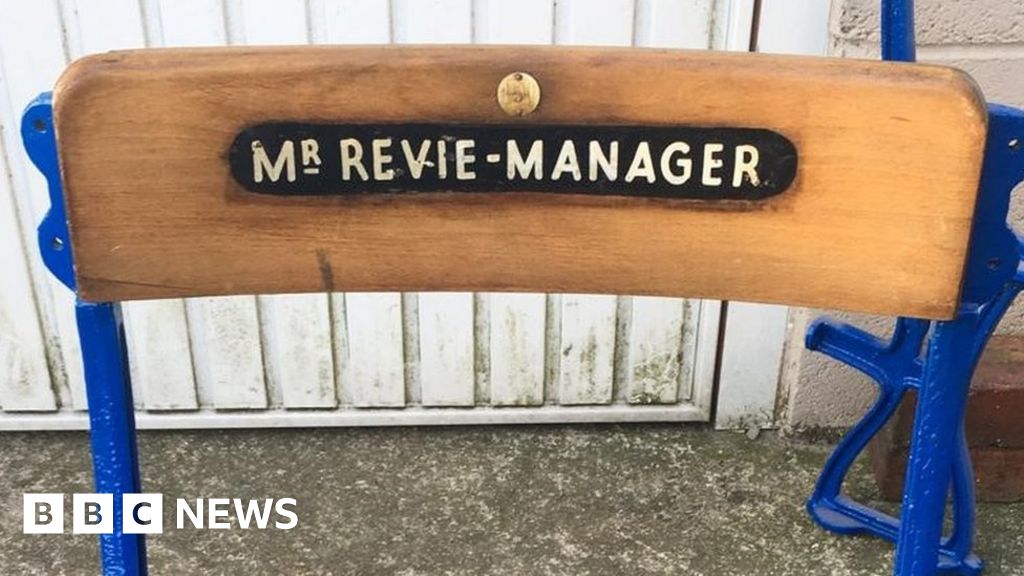 Don Revie was appointed manager of Leeds United in 1961

A wooden chair thought to have been used by Leeds United's most successful ever manager is to be sold at auction.

The seat, emblazoned with the name of Don Revie, is one of eight similar lots due to go under the hammer and is expected to fetch up to £3,000.

It was discovered by Sean Birch who uncovered the former Leeds and England manager's name during restoration.

The sale is being held at Tennants Auctioneers in Leyburn, North Yorkshire, on 15 December.

Mr Birch, 53, who runs Sean's Barber's, in Yeadon, bought the chairs from a man in Shipley, West Yorkshire, to go in his waiting room.

He said the seats were covered in plastic laminate, but once he stripped them back he found names linked to the club, including Mr Revie's, Mr Silver's, and RP Ziff.

He said was "smiling more than he did on his wedding day" after making the discovery, and has since had them valued on the BBC's Antiques Roadshow.

The chairs were originally bought by Leeds United fan Sean Birch, to use in his barbers' shop

Revie was manager at Leeds United between 1961 and 1974, bringing Leeds United a level of unprecedented success.

He took the club into the top tier of English football and made them into one of the hardest teams to beat in Europe.

Part of his tenure featured in the 2009 film The Damned United, which dramatised events at the club when Brian Clough took over from Revie for a period of 44 days.

Stylo Matchmakers was a brand made famous during the 1960s and 1970s by footballing heroes such as Pele, George Best and Kevin Keegan.