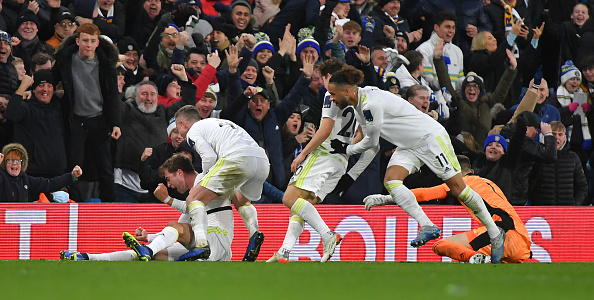 Leeds United striker Patrick Bamford has said on BBC Sport that his dad will not be happy with his celebration against Brentford.

Bamford came off the bench to score for Leeds in the 2-2 draw with Brentford at Elland Road in the Premier League on Sunday.

The England international striker found the back of the net in the fifth minute of injury time.

Bamford was making his comeback after a spell on the sidelines due to injury.

And the £74,000-a-week (Salary Sport) striker could not contain his  emotions, as he took his shirt off, earning a yellow card in the process.

Bamford has said that he was caught up in the emotions, adding that his dad will be furious with him.

The striker said on BBC Sport, as transcribed by InsideFutbol: “When I was warming up in the first half, I thought I was going to come on when Coops got injured, and I thought, that is quite early.

“But I think for me it was important to get back on the pitch and if I hadn’t scored the goal..I hadn’t had a great performance, I was rusty, had been out for a while. I think the goal kinds of masks that a little bit.”

Bamford added: “My dad is going to kill me for taking my shirt off, but it was just one of those moments you get caught up in.”

Back with a bang

Bamford is the best striker at Leeds.

And Leeds have missed him in the past few weeks.

Now that Bamford is back and firing again, the Elland Road faithful will be more optimistic about escaping the dreaded drop to the Championship at the end of the season.

Leeds have started to do well and pick up points.

And with Bamford back, in our opinion, Leeds will be safe from relegation.