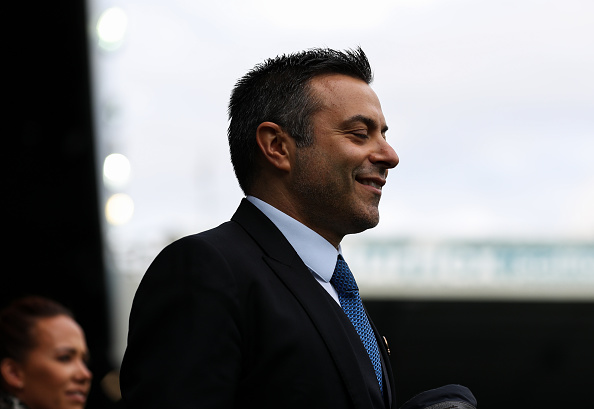 LEEDS, ENGLAND – OCTOBER 19: Leeds United owner Andrea Radrizzani in the dug out area before the game during the Sky Bet Championship match between Leeds United and Birmingham City at Elland Road on October 19, 2019 in Leeds, England. (Photo by Alex Dodd – CameraSport via Getty Images)

There are some collaborations you just don’t expect to see in the world of sport.

Whether it’s Matthew McConaughey tweeting Gerwyn Price after he won the Grand Slam of Darts, Vinnie Jones turning up in the WWE or Jon Bon Jovi representing Leeds United on Twitter, every now and then you get some incredibly bizarre sporting/celebrity crossovers.

However, this one may top the lot. Kim Kardashian has posted a story on his Instagram account featuring Leeds United, the Afghanistan women’s youth team and the Yorkshire club’s owner Andrea Radrizzani.

As bizarre as it is to see Kim K post about Leeds United, it has to be said that this is for a brilliant and worthy cause.

Kardashian and Radrizzani joined forces earlier this month to help 130 young women footballers escape Afghanistan amid political unrest in their country, and they’ve played a part in helping them resettle in the UK.

The women’s team have  been training at Thorp Arch, and as you can imagine, Kardashian and Radrizzani are incredibly proud of what they have achieved here.

This just goes to show the power that sport can have in terms of uniting different cultures, and hopefully, these girls’ lives have been changed permanently and for the better by the efforts made by Leeds United and Kardashian.

Leeds deserve commending for their work here, as does the reality TV star.