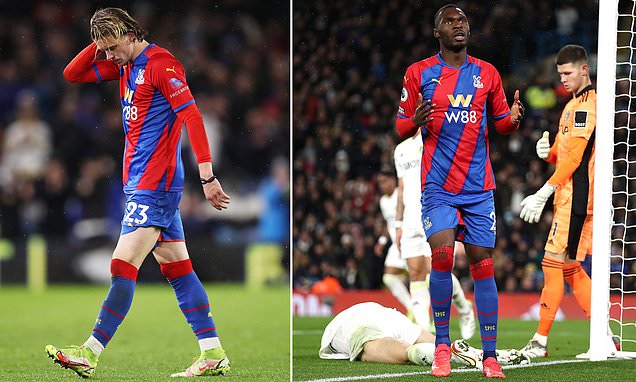 But the Eagles passed up a number of opportunities to score at Elland Road, with Christian Benteke the main guilty party after missing a header from just a few yards out.

Chelsea loanee Gallagher insisted therefore Palace did not deserve to come away with no points despite having played better in previous matches this season, but called on his side to 'keep working hard' to bounce back.


Asked how difficult the result is to take, Gallagher told the BBC: 'Really difficult, we are very disappointed to lose the game especially conceding right at the end.

'I didn't feel like we deserved it, we have played a lot better than that but we are gutted. We have to take it on the chin and bounce back.

'We had chances to win the game, we want to be winning these games but they made it hard for us, pressed well. On another day we could have come out with the win.

'We are making good progress and working hard to improve, not every game is going to go well, we need to keep our heads down and keep working hard.

'I am really enjoying playing under Patrick and for Crystal Palace and hopefully I can improve and the team can improve.'

Palace defender Joel Ward echoed his team-mate's sentiments and believes Palace should have earned at least a point.

But the 32-year-old admitted he knew something was up when referee Kevin Friend consulted the VAR pitchside monitor for Guehi's handball.

'Coming away from home, putting in a performance like that and creating chances, we certainly should have got something out of the game - or maybe even taken three points,' he said.

'I think our performance was a positive performance. Away to Leeds is going to be a tough evening, but we matched them all over the pitch and created better chances.'

On the penalty, he added: 'When you see the referee give the signal, you know there's something there. You just prepare yourself for what's coming next.'

Palace - who lost at home to Aston Villa at the weekend - travel to Old Trafford to take on Manchester United in their next top-flight fixture on Sunday.

The Red Devils are hopeful interim boss Ralf Rangnick will take charge of his first game against Vieira's men, despite the German still needing to convince an FA panel of his managerial credentials to secure a work permit.