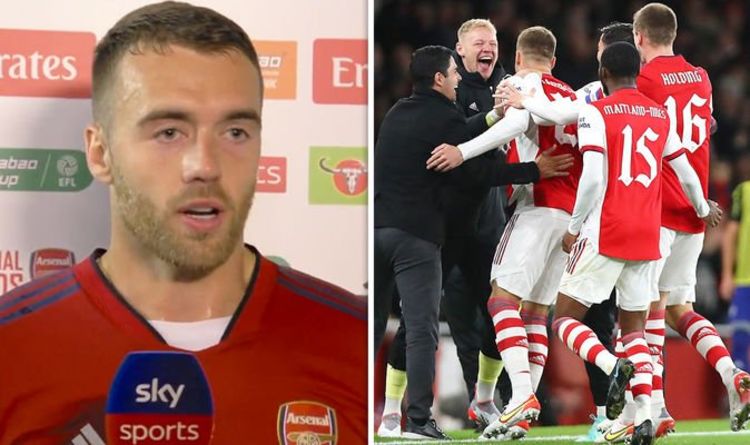 Arsenal defender Calum Chambers has revealed how a member of the Gunners coaching team foresaw his goal against Leeds on Tuesday night. Chambers put Arsenal into the lead just 23 seconds after replacing the injured Ben White in the second half of the Carabao Cup clash at the Emirates. Nicolas Pepe did well to keep a corner alive and Chambers headed in from close range.

Referee Andre Marriner had to rely on goal-line technology to confirm the ball had crossed the line after Illan Meslier appeared to have kept the effort out.

Chambers sprinted over to the home dugout to celebrate his side going a goal ahead.

And after the match he revealed how set-piece coach Nicolas Jover told him he would score from the corner.

Chambers told Sky Sports: "Set piece coach Nico told you’re going to score from your first touch so that’s why I went running over to him. It was a nice moment.

"I was pretty confident it went over, I saw the ball over the line so I was just waiting for him to give it. Luckily he did."

Eddie Nketiah grabbed the second goal for Arsenal, poking in from close range after rounding Meslier.

It was the 22-year-old's second goal in as many games in the competition this season.

He hopes he can continue to push his case for selection in an Arsenal side who are unbeaten in their last eight.